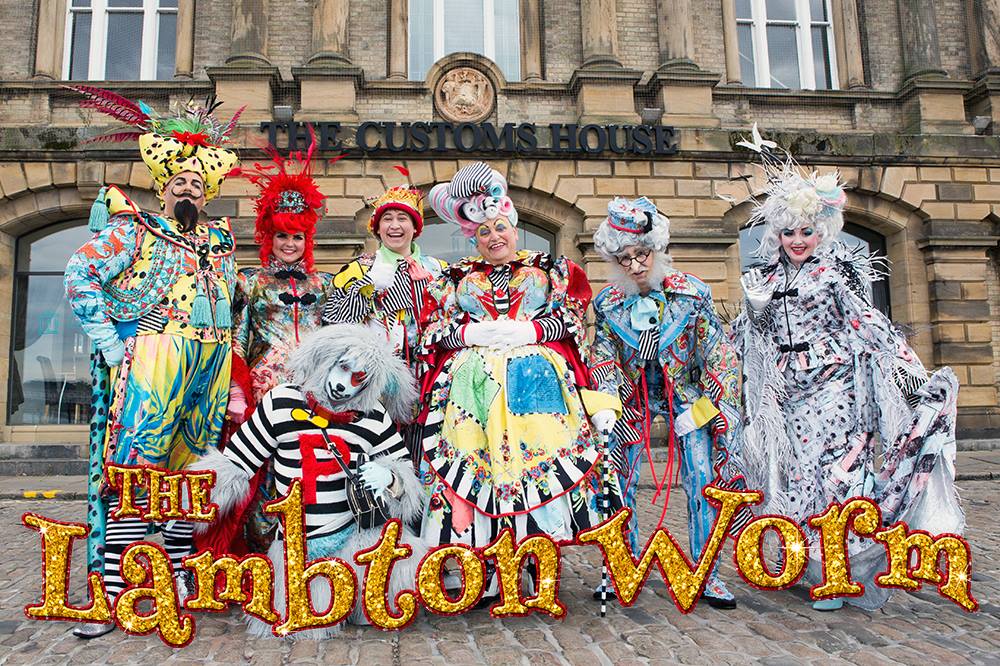 The Little Panto with the Big Heart is back and this year, writers Ray Spencer and Graham Thompson have brought The Lambton Worm to the South Shields stage.

Since the closing night of Jack and The Beanstalk in January, I’ve been intrigued all year as to how The Lambton Worm would play out as it isn’t a traditional panto.  When I first heard that The Customs House would be celebrating 150 years of the old folk song with this new pantomime, I was unsure as to how it would translate into a theatrical performance and I was excited to see the result. 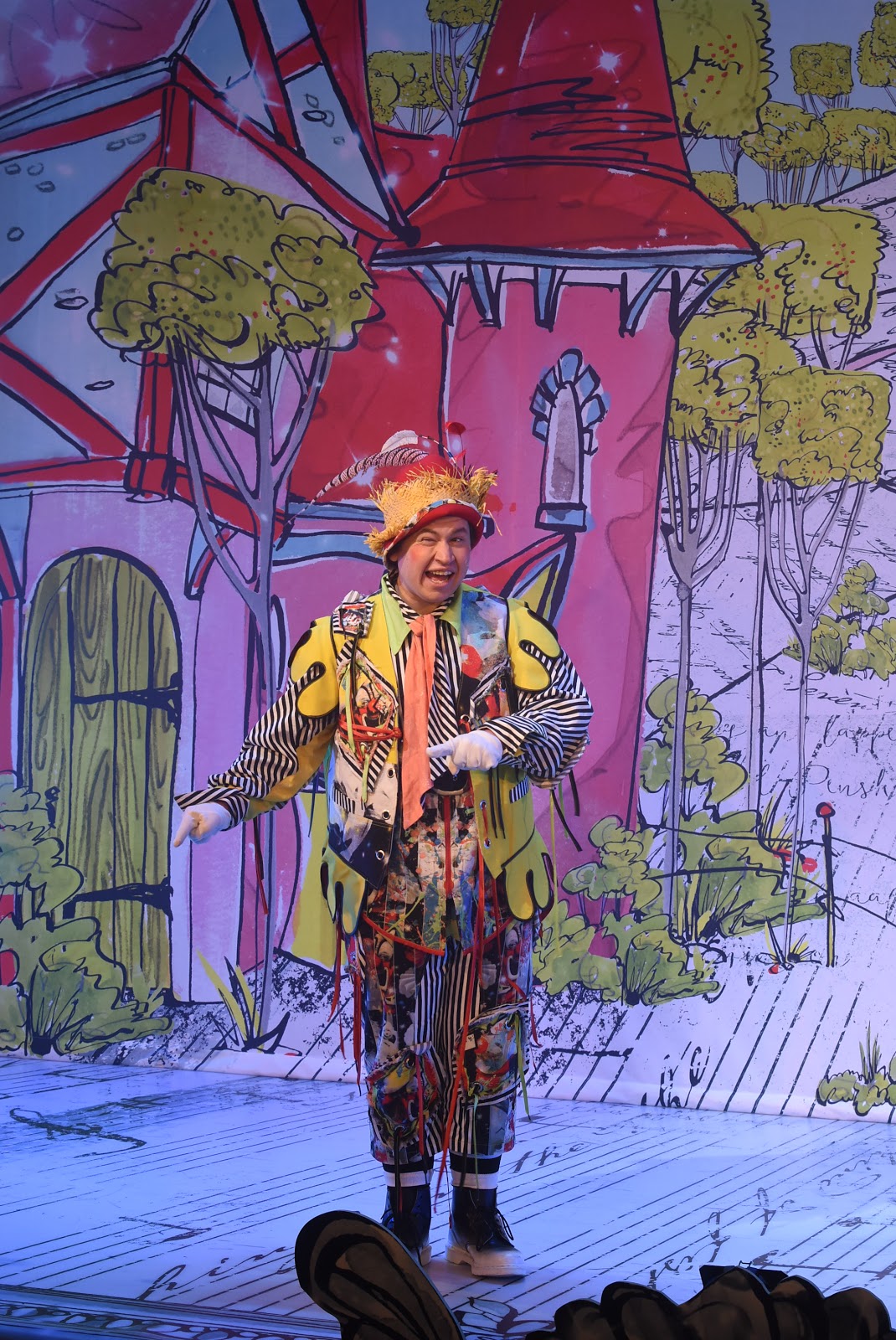 If you’re from the North East, then I’m sure you’ll have heard the story of The Lambton Worm.  I remember learning about the traditional folktale back in junior school and even recited the tale as the head of the worm in a school assembly; I’m yet to discover if my casting was due to my ability to speak confidently in public or my resemblance to the worm itself, hopefully the former.

Thankfully, The Customs House cast do a far better job at telling the tale than I ever could and they blend the traditional folktale with elements of a classic pantomime exceptionally well. 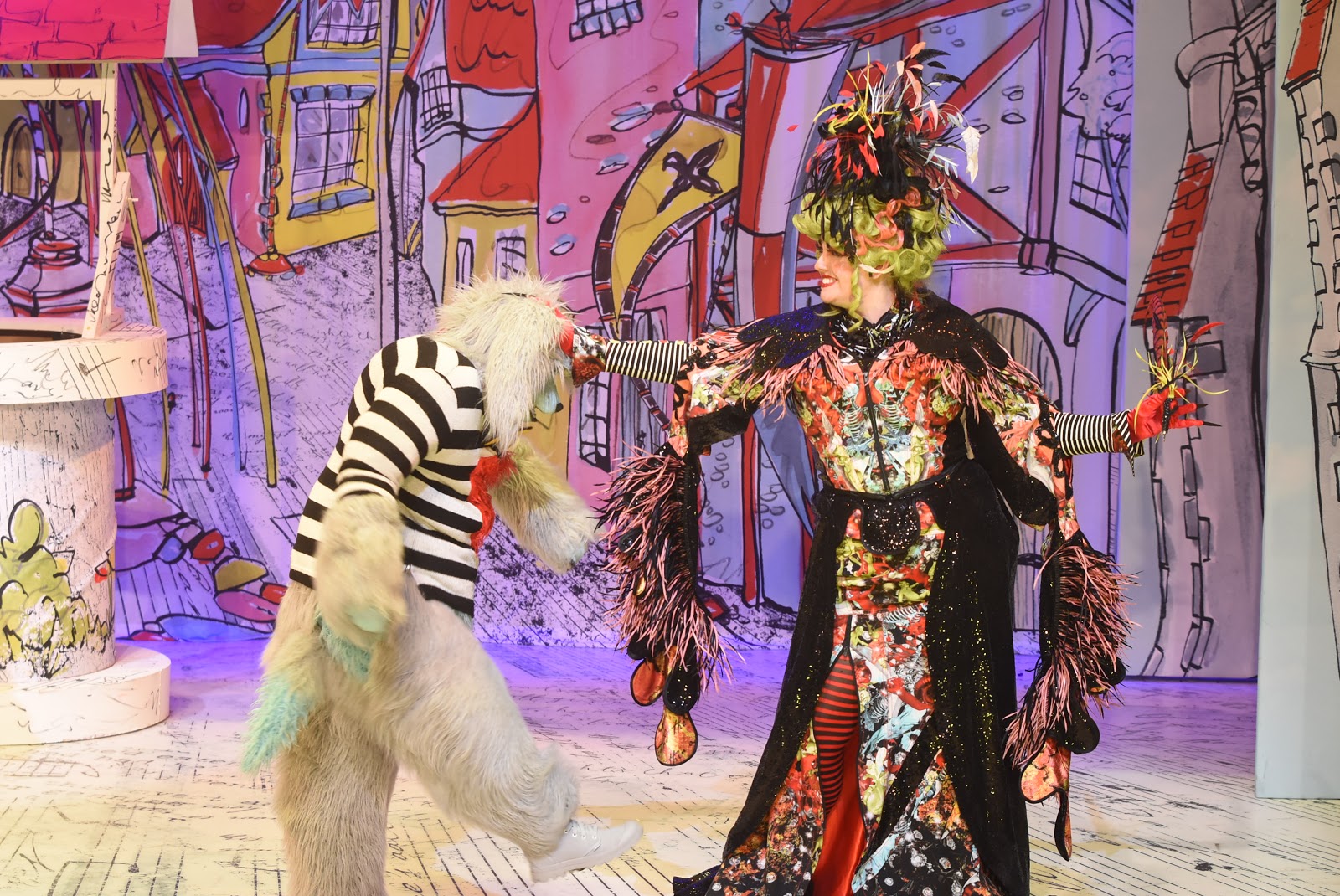 This retelling starts with a reflection back to the childhood days of friends John Lambton and Arbuthnot, their dog Puddles and the Penshaw twins, Penelope and Susie the Soothsayer who all love playing together around Lambton Castle and fishing in the River Wear.  One day, John catches an awful looking fish and while showing it to the twins, it falls down the well and puts an end to their friendship.  However as the years pass and the children grow into adults, who still hold their grudges, the worm grows too, becoming the ginormous Lambton Worm.

Penelope, played by the beautiful Georgia Nicholson, becomes the cunning Poison Pen and is hell bent on revenge using the worm.  While the kids lives  may have taken them off in different directions, the impending danger will see them all brought all back together. 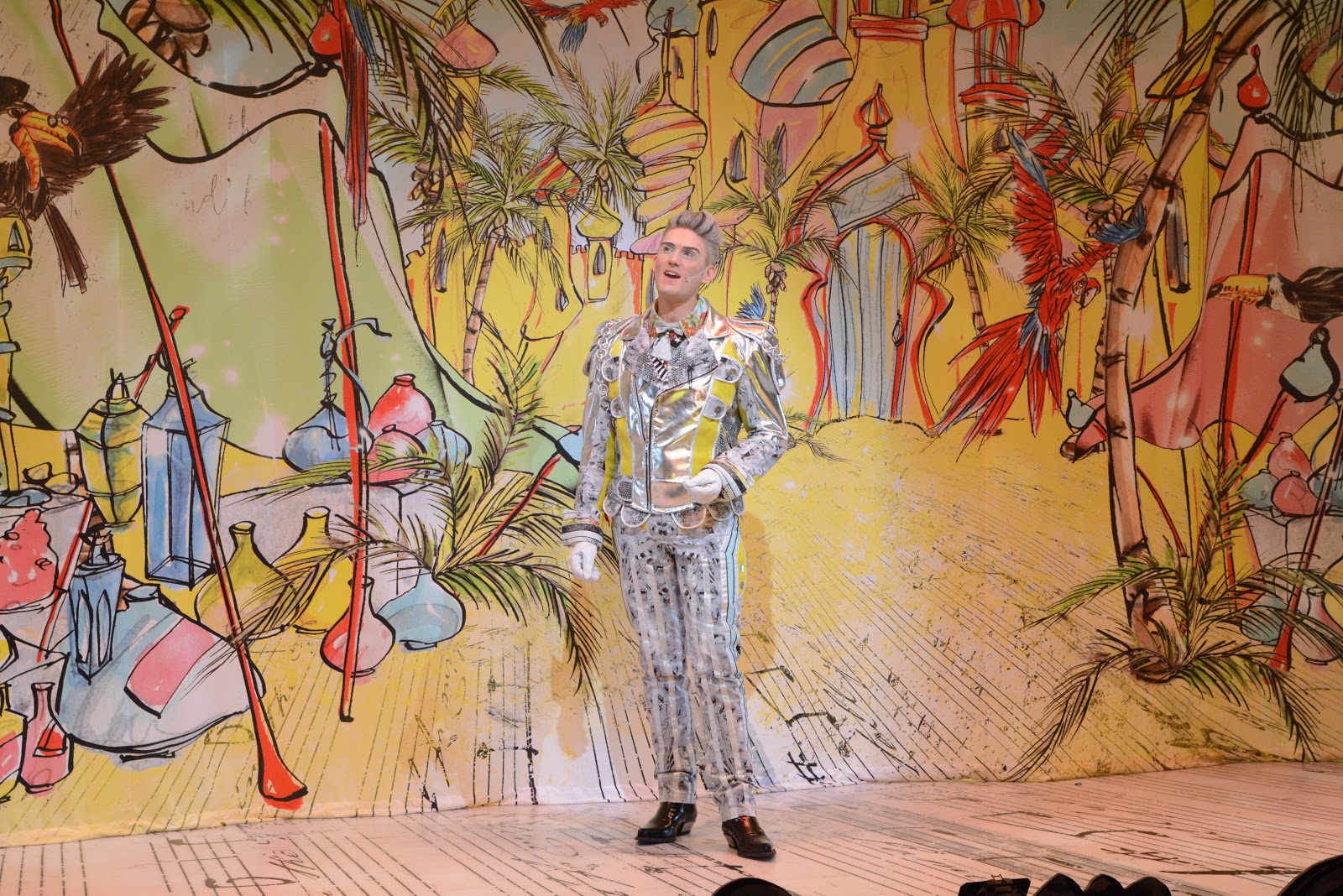 Goodie, Susie the Soothsayer gives the power of speech to Puddles the dog, energetically played by Lewis Jobson, so that he can warn the Dame and Arbuthnot of what is to come.  The brave and bold John Lambton is summoned to a help fight the monstrous beast.  He returns accompanied by Princess Aneesa who he has been entertaining in foreign lands, much to the irritation of the Sultan, expertly played by encore favourite, Gareth Hunter who brings a towering air of superiority to the role.

But what happens next?  How does the story pan out?  Well, you’ll have to go along to see it of course.  I’ll not spoil all the fun for you but what I will say is that you’re guaranteed to laugh with the unbeatably funny messy scene and the most tremendous super hero costumes this side of galaxy; I’ve seen things I cannot un-see after this pantomime and you really must go along to witness it for yourself! 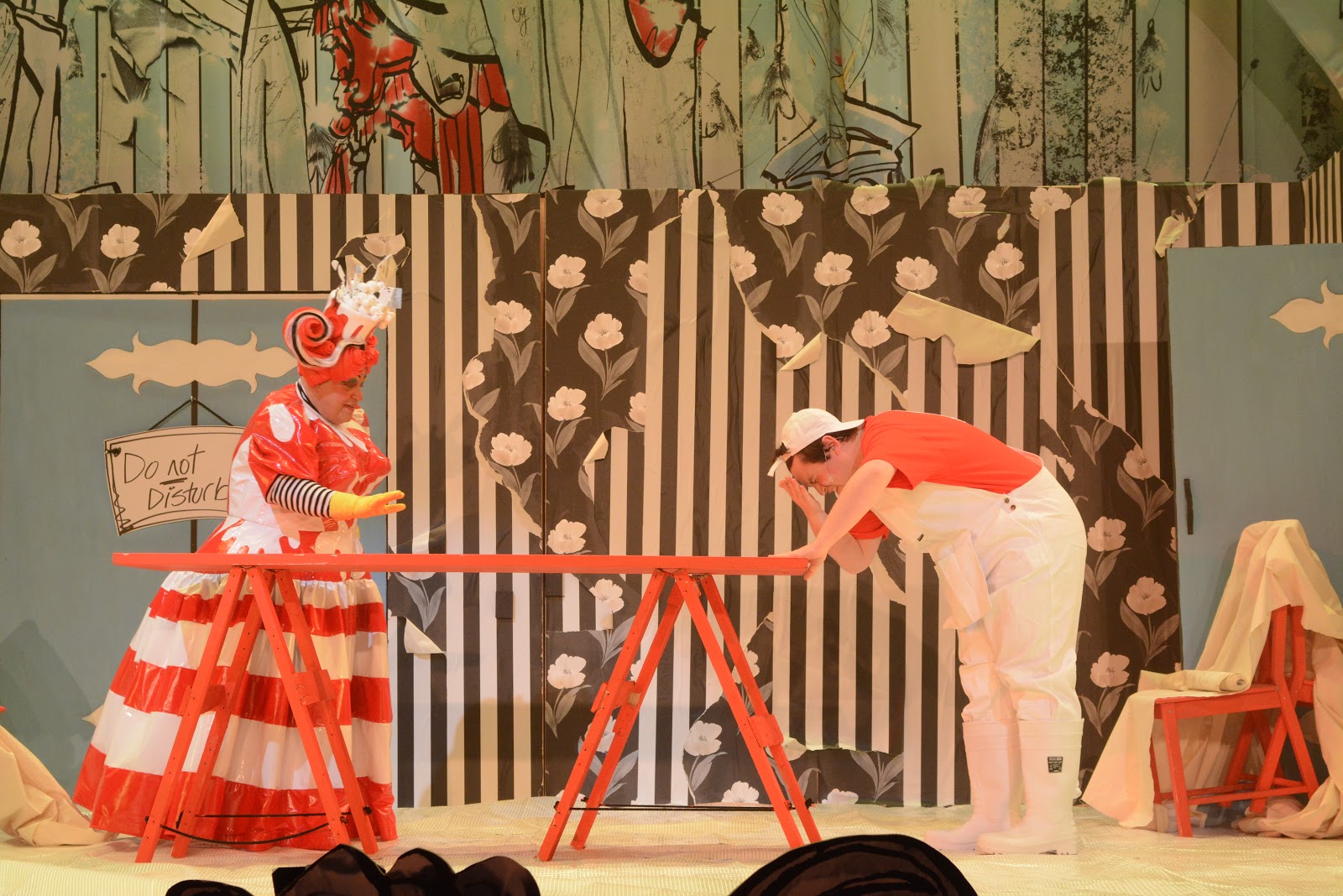 Quick witted and very cleverly written, this is the panto that has me literally crying with laughter year after year and 2017 has been no exception.  That’s largely down to the roles of Dame Bella Ballcock and Arbuthnot played by Ray Spencer and David John Hopper respectively.

Ray Spencer has been entertaining audiences for years; he’s absolutely hilarious, especially when Arbuthnot is the butt of his jokes, and so quick with his one liners and ad libs that the panto wouldn’t be the same without him.  However this year, David John Hopper proved that The Customs House pantomime wouldn’t be the same without him either.  I never thought there’d be another person to make me laugh like Spencer does, until I saw Arbuthnot in another pantomime back in summer.  Hopper has really developed the character and his comedy timing is impeccable; he is without a doubt, the next Ray Spencer. 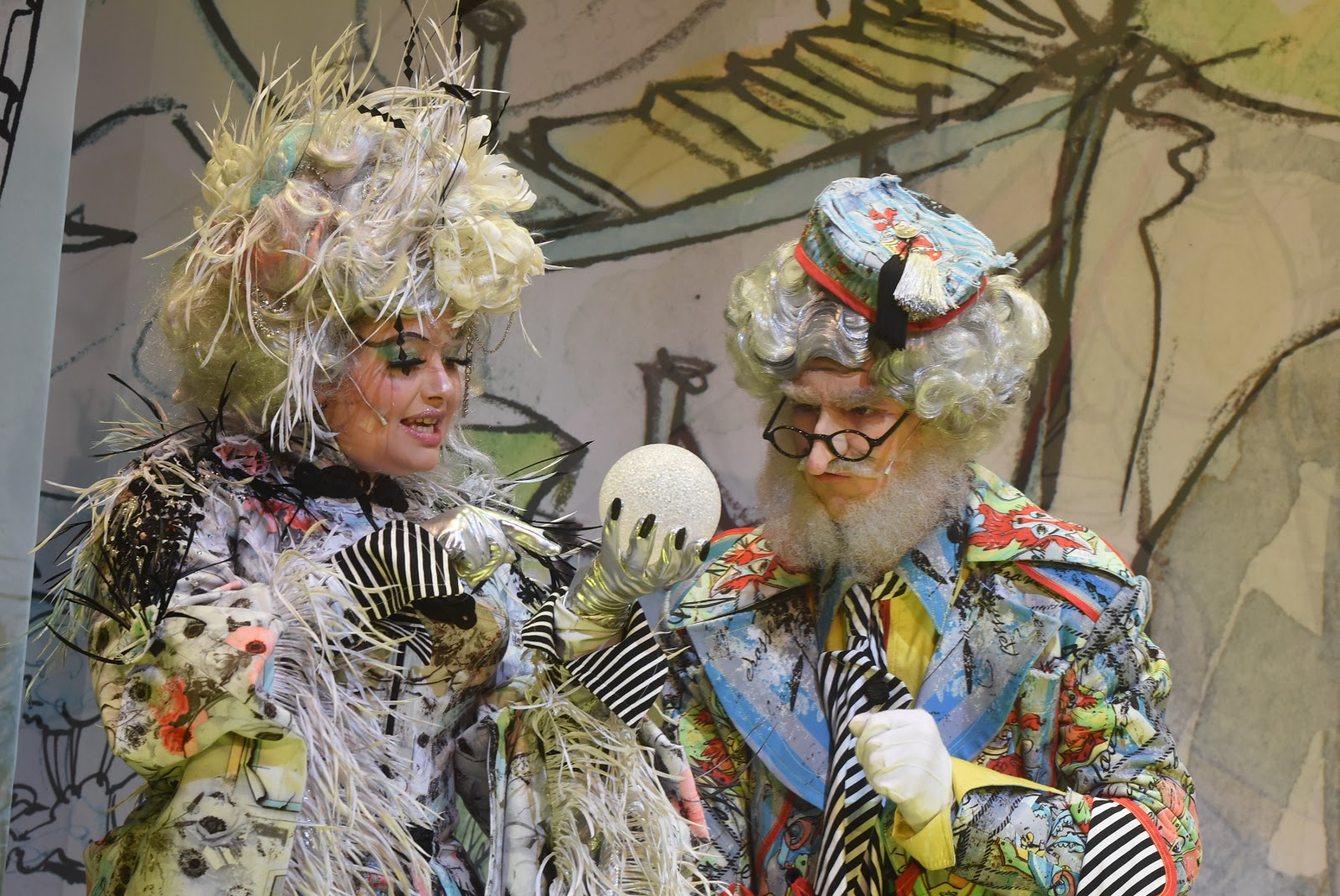 I say it every year but there is more jokes in it for the adults than the kids but even funnier still is what is said outside of the script.  Its the ad libs and I can’t believe that just happened moments that really make this pantomime even more special.  The ability to deviate off course from the structure of the script while not losing the story is a real skill and these guys have it down to a fine art.

The chemistry between the whole cast is really great to see, they’re a close knit bunch so when things happen on stage that even they didn’t anticipate, it makes the scene even funnier. 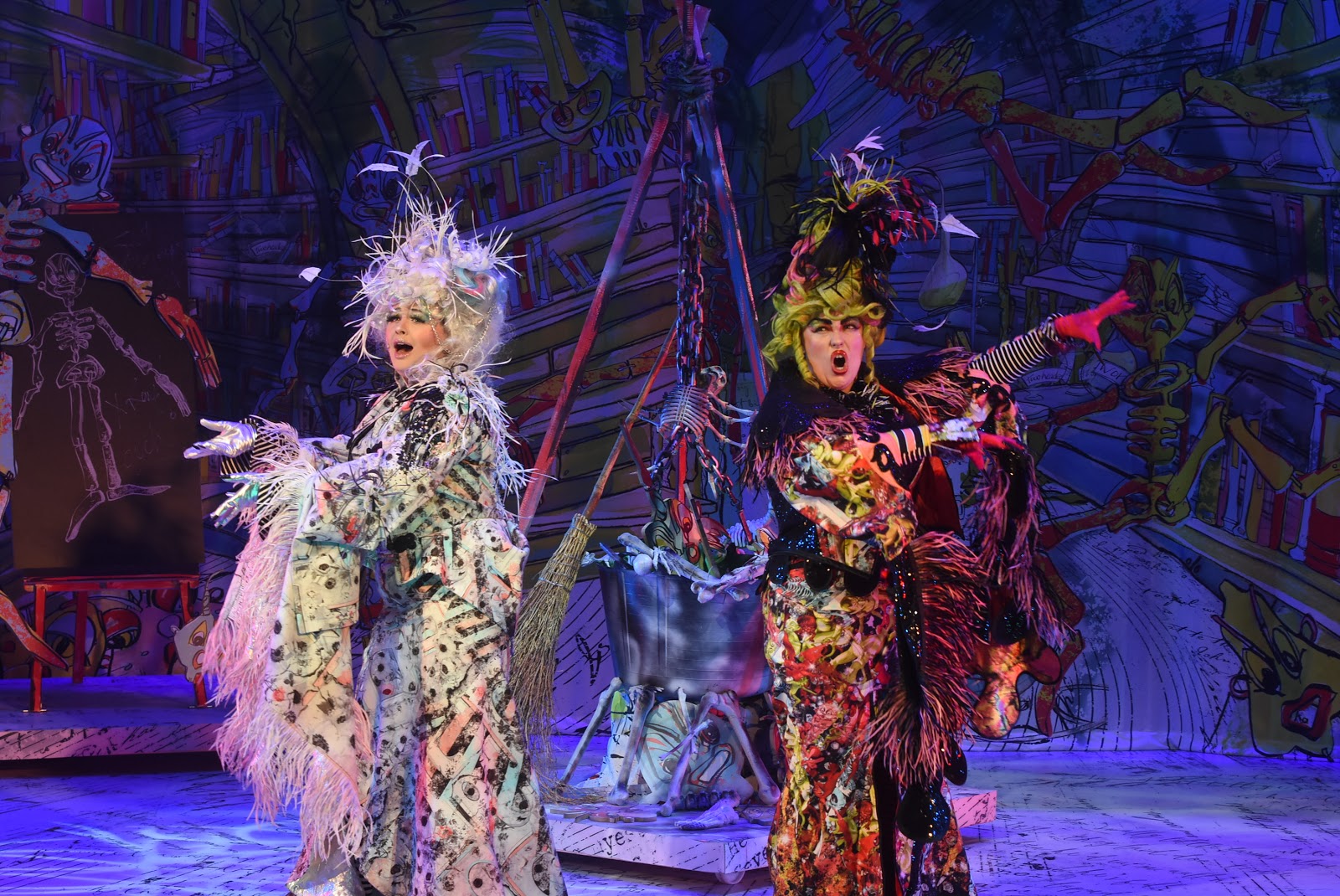 It was lovely to see Natasha Haws cast in a different kind of role this year, as Susie the Soothsayer, rather than as the princess as she has been in previous years.  The role of Susie really suits her both vocally and theatrically and I think that came across in how comfortable and natural she was on stage.  What I loved about her in this role was how her humour and sarcasm was able to subtly come across which gave her character more depth and provided a great contrast between her and the other comics in the show.

Being a ‘goodie,’ she contrasted so well with the ‘baddie’, Poison Pen.  Georgia Nicholson took to her role like a duck to water and really commanded the stage, with both the children and adults in the audience boo-ing with passion. 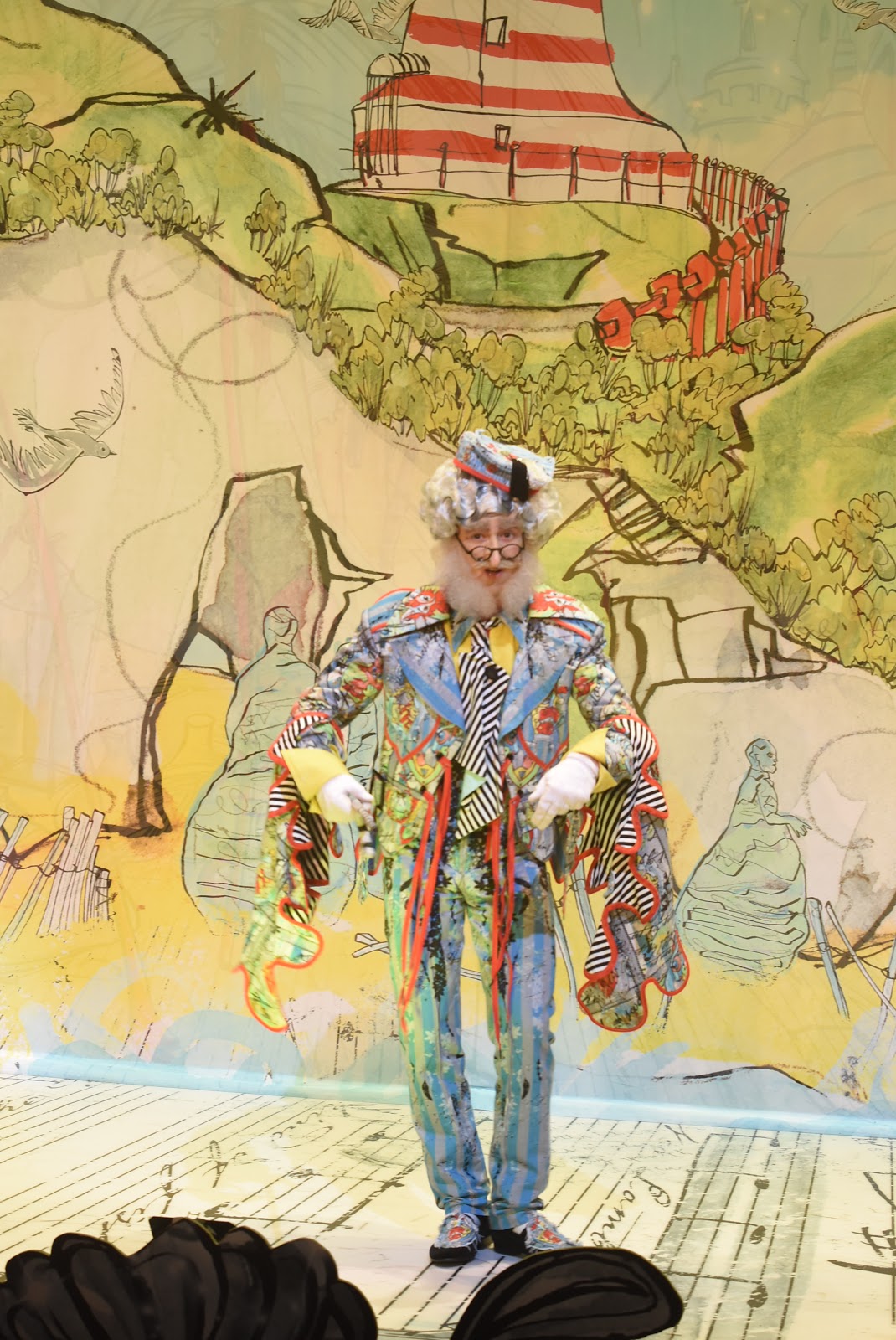 Adding another layer of comedy value to the panto this year was the casting of Cal Halbert as Lord Larry Lambton.  You might remember him alongside Alfie Joey as impressionists, The Mimic Men, on Britains Got Talent.  I’ve seen him doing his fantastic live impressions before but in the panto he really impressed me with how he was able to blend them into his role of Lord Lambton so effortlessly, showing his strength as an actor.

Halbert appeared to be so comfortable on stage and very well rehearsed which came across in how well paced he was.  I’ve seen other impressionists in different pantomimes and sadly they’ve fallen short of the high standard that Halbert sets in The Lambton Worm. 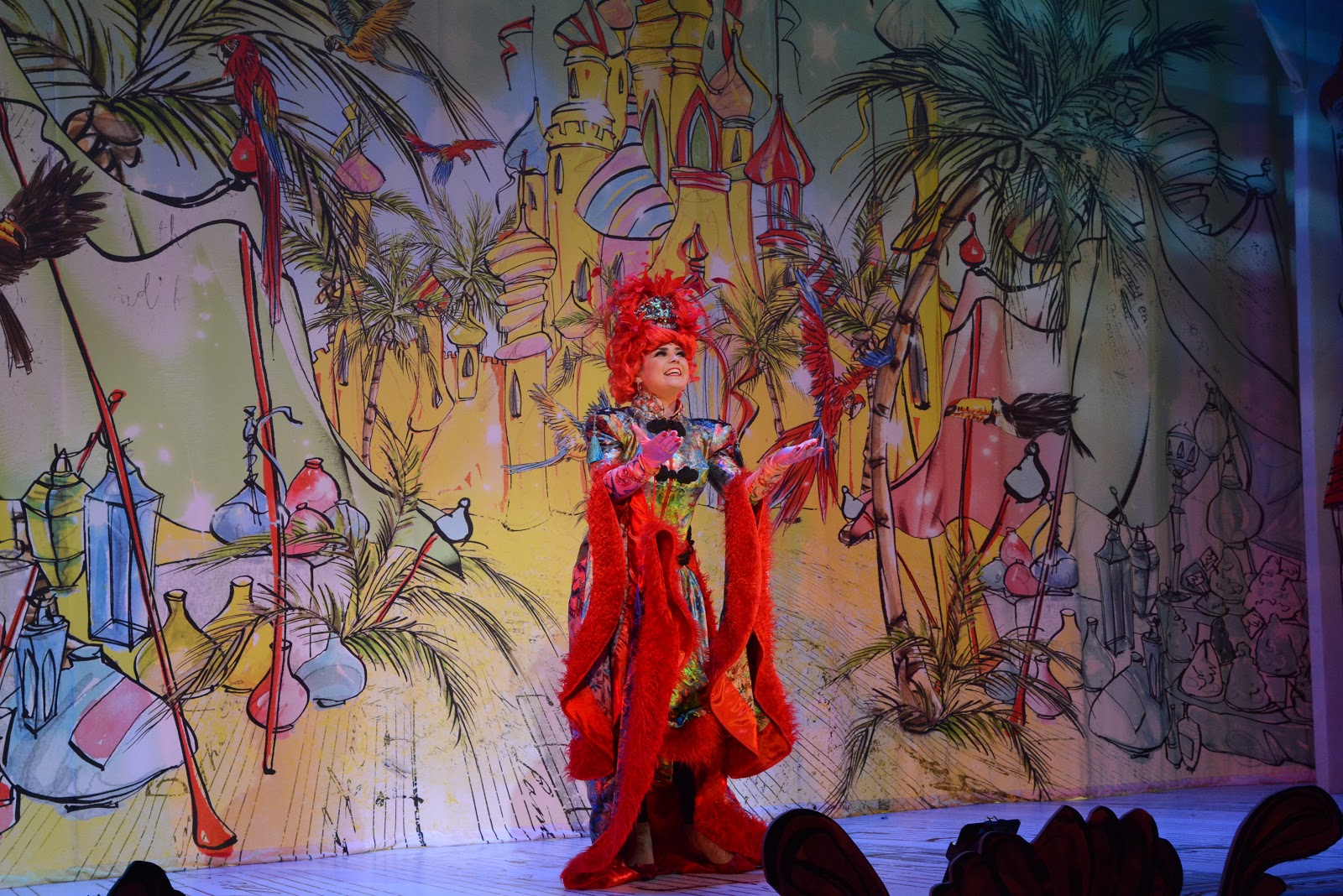 The Customs House pantomime felt as though it had a change of dynamic this year with less of a focus on the prince and princess style roles like a lot of pantomimes do.  However the difference with The Lambton Worm is that all roles are strong and expertly cast, especially in the case of Eleanor Chaganis who impressively held her accent throughout the performance as Princess Aneesa, and Steven Lee Hamilton as the handsome Brave and Bold John Lambton.

Both with incredibly warm and rich voices, they gave a lively and animated performance with a captivating stage presence, proving that they are natural leads. 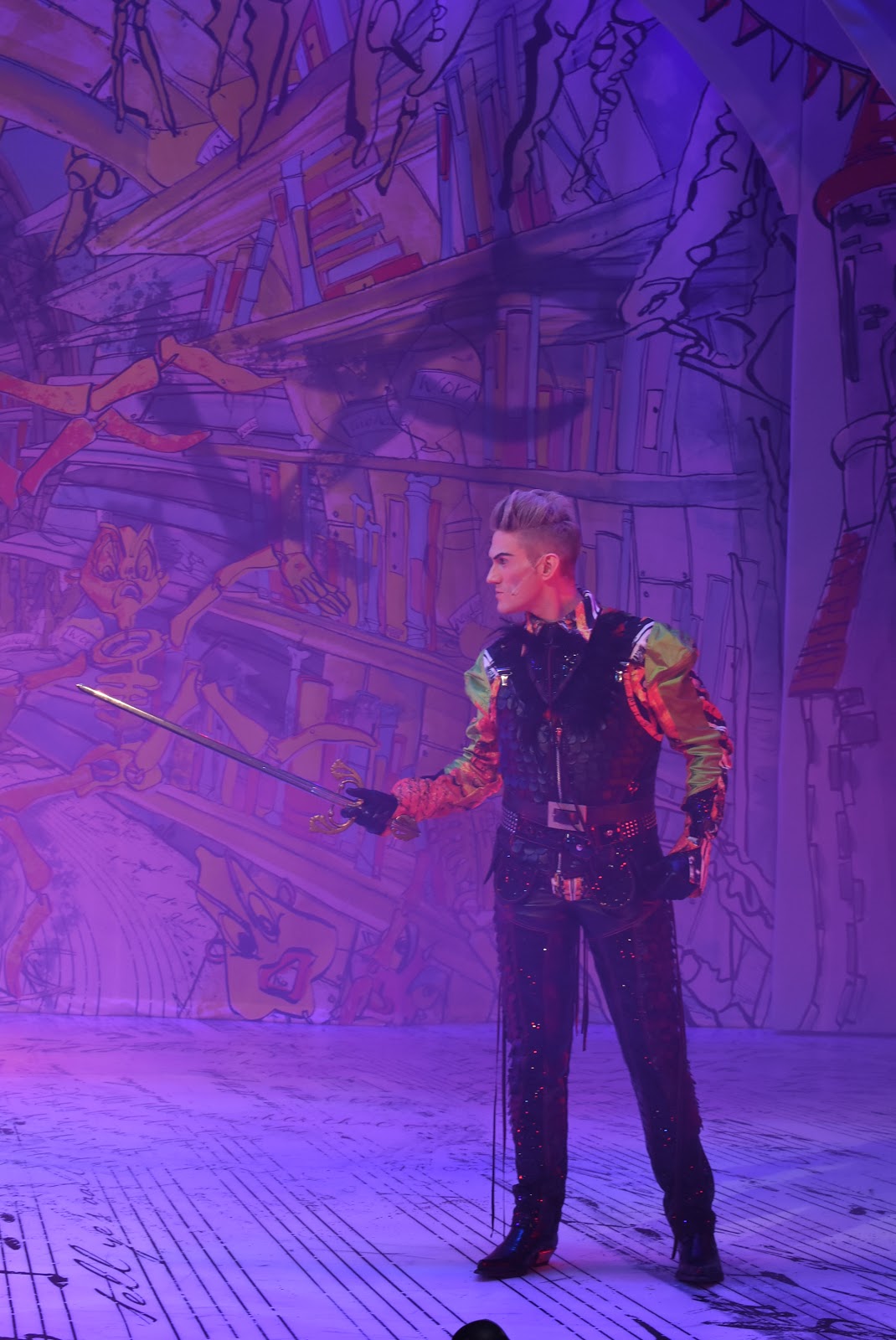 The Lambton Worm is a brave step away from traditional fairytales that are replayed year after year at theatres all over the country.  The Customs House has always been a panto written by the North East, for the North East but retelling the treasured story of The Lambton Worm cements that.

The story was brought to life further by couture theatrical costume, set and digital fabric designers, Fox and Shriek who have been working with The Customs House for years now.  The dynamic set design is colourfully vibrant, surreal and unlike any other panto set I’ve seen before.  A further unique touch came from the addition of The Lambton Worm song manuscript woven throughout the design.  Fox and Shriek truly bring the characters to life with their work with stunningly detailed costumes you wouldn’t find in other theatres. 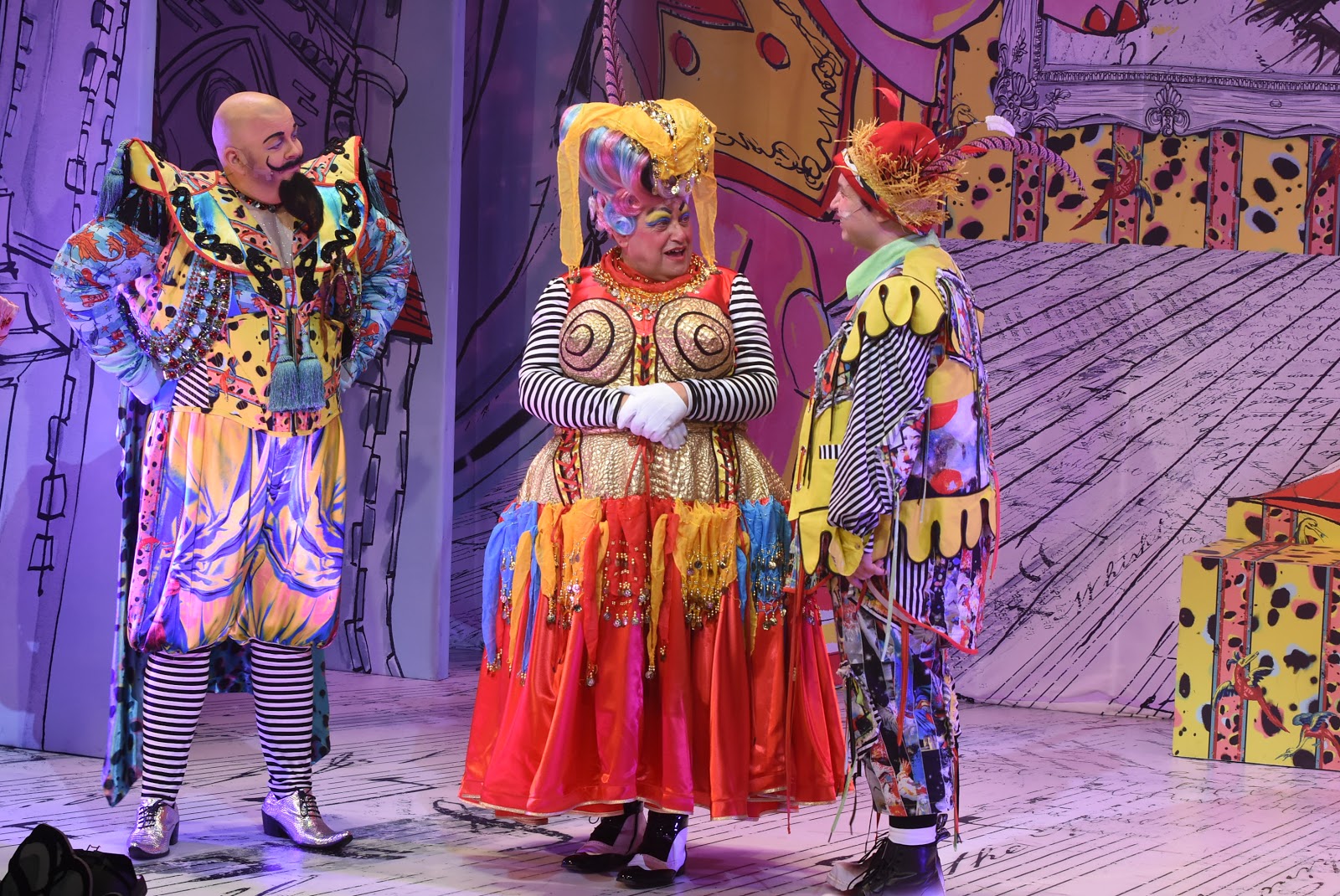 The Lambton Worn is certainly a pantomime for all the family. With the entire performance firmly rooted in the North East, I felt really proud to be from here as I left the stalls smiling at the end of the night.

There’s plenty of fabulous songs, sing-a-long and join in moments and all of the he’s behind you’s that you’d expect from a classic pantomime but with a twist that only The Customs House can give.

You wouldn’t be alone in thinking that Christmas Day is my favourite day of the festive season but you’d be wrong; the day I go to see the The Customs House pantomime is the one I look forward to the most throughout the whole year.  No matter how tough my year has been, I go to see a show, laugh my socks off and leave feeling happier than ever.  If laughter is the best medicine, then its the best therapy you could ask for.

I’m a big believer in not wasting your money, especially when it takes so long to earn it and panto is very much a family affair which can quickly add up.  So with that in mind, the only panto I can wholeheartedly recommend and guarantee you’ll love this Christmas is The Lambton Worm at The Customs House.

Its the one pantomime that you can consistently rely on to deliver, show after show, year after year.  Their focus isn’t on paying large sums of money to big names that don’t quite deliver.  Instead, they focus on a strong cast with incredible vocal, comic and acting abilities, performing on a visually captivating set in costumes to rival those with the largest budgets. 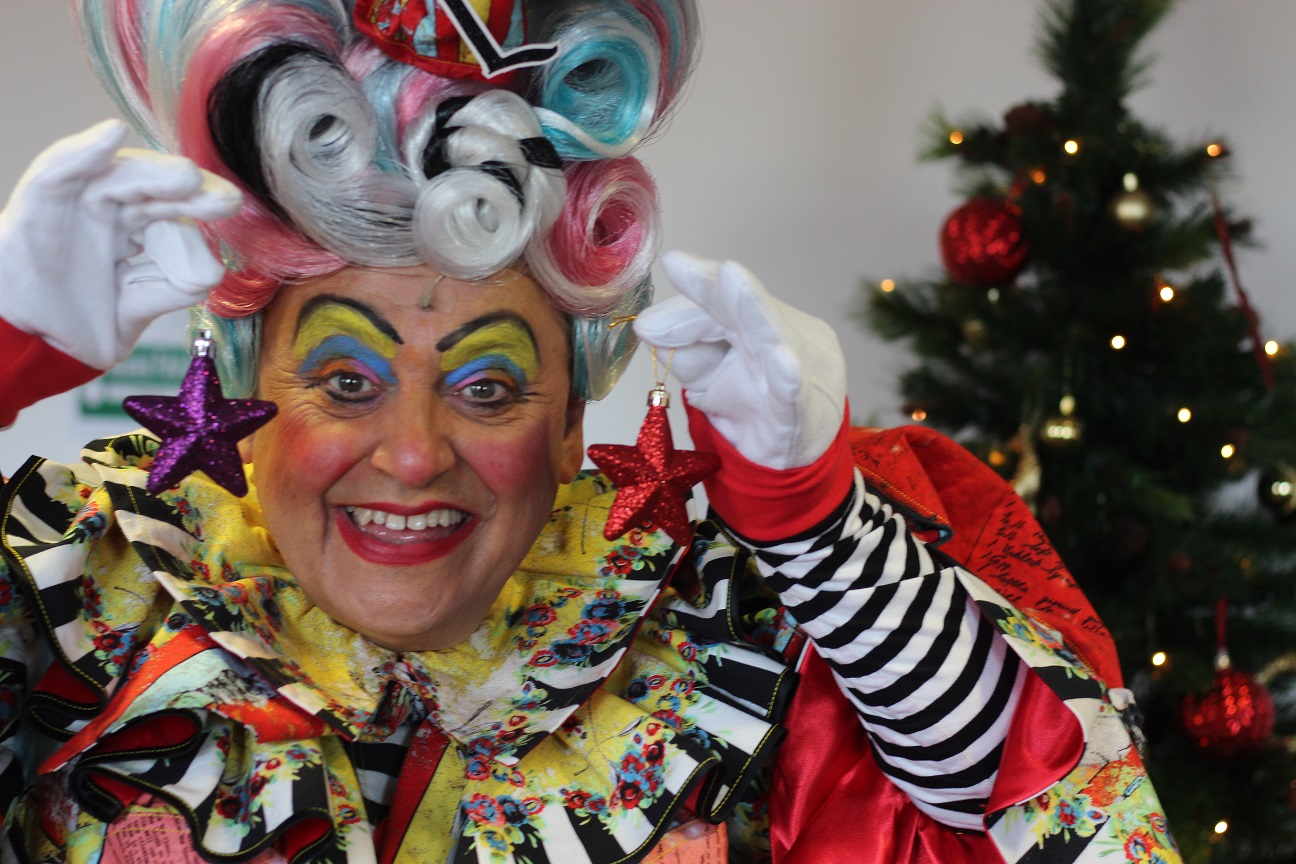 Rather than inflating ticket prices, they keep them reasonable, starting at just £9.99 and the great thing about The Customs House is that no matter where you’re sitting, you’ll always get a great view of the stage.  Bar drinks, snacks and merchandise are very reasonable too, compared to many other venues.

They’ve even launched their wishing on a star fundraising campaign to help more children and families visit The Customs House pantomime in the future.

Star-shaped baubles are available to purchase at the box office for only £1 for people to add their own wishes to and hang in The Green Room cafe, bar and bistro.  The proceeds will then go towards subsidising tickets for next years show, Beauty and The Beast, for people who would otherwise not be able to attend a panto performance. 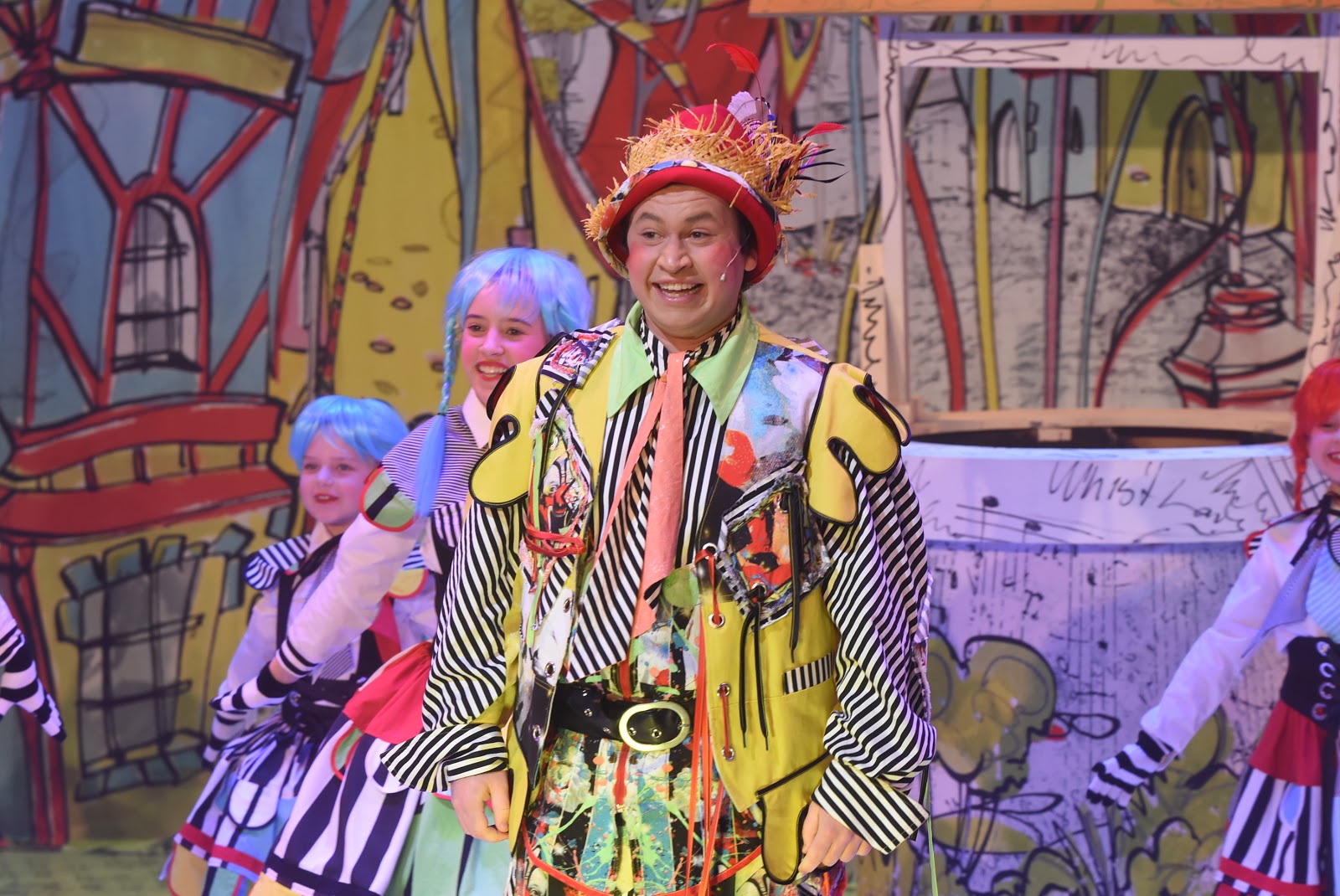 The Customs House are celebrating 150 years of The Lambton Worm folk song right up until 6th January so there’s plenty of chances for you to go to see it.