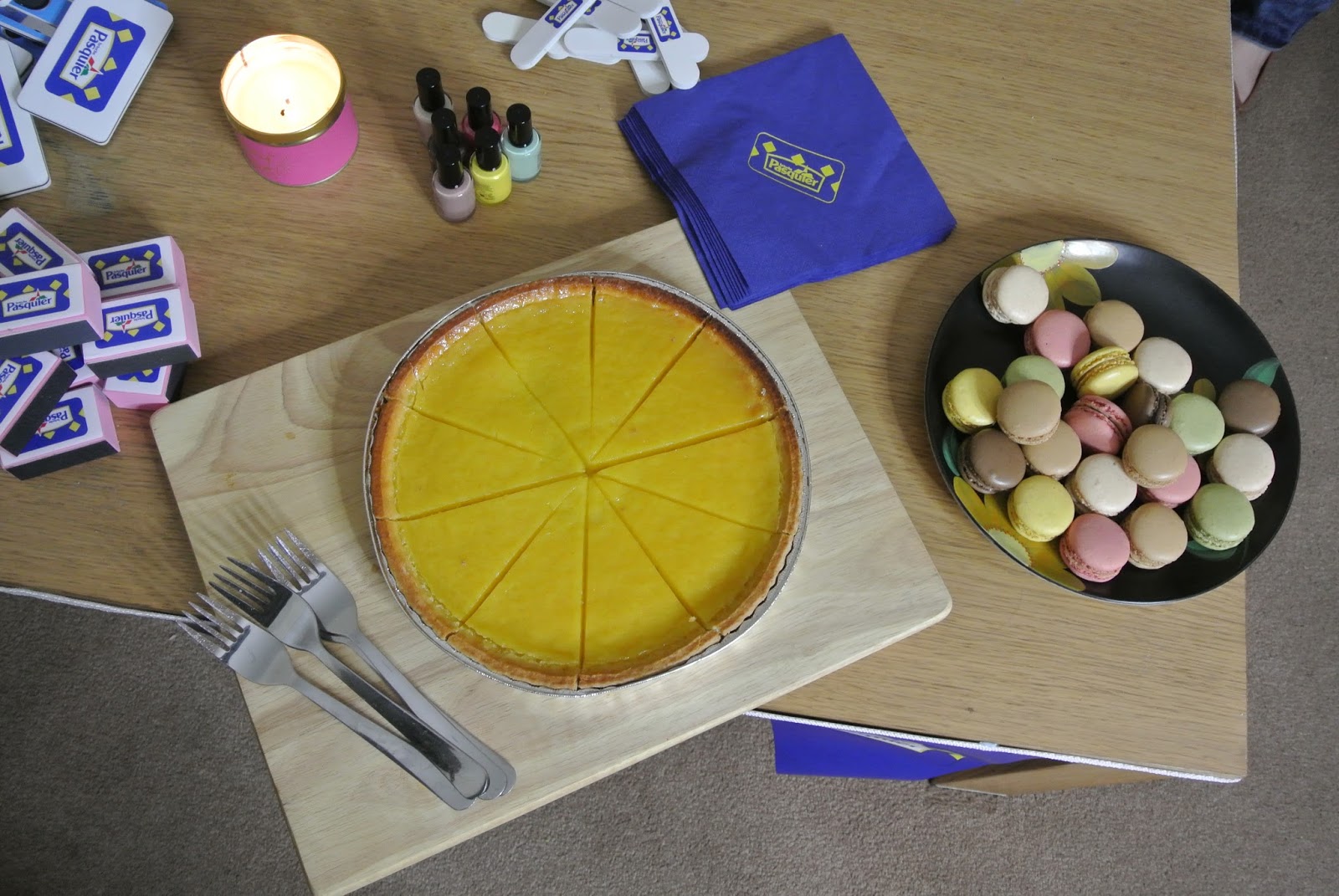 After a long week at work, theres nothing that the girls and I love more than a Sunday night in, catching up and getting pampered, ready for the week ahead.

If truth be told, we had intended to get together to celebrate Galentines Day (Parks and Rec fans will know what I’m talking about) but our schedules were so busy that we had to put it off until the end of February but it was certainly worth the wait! 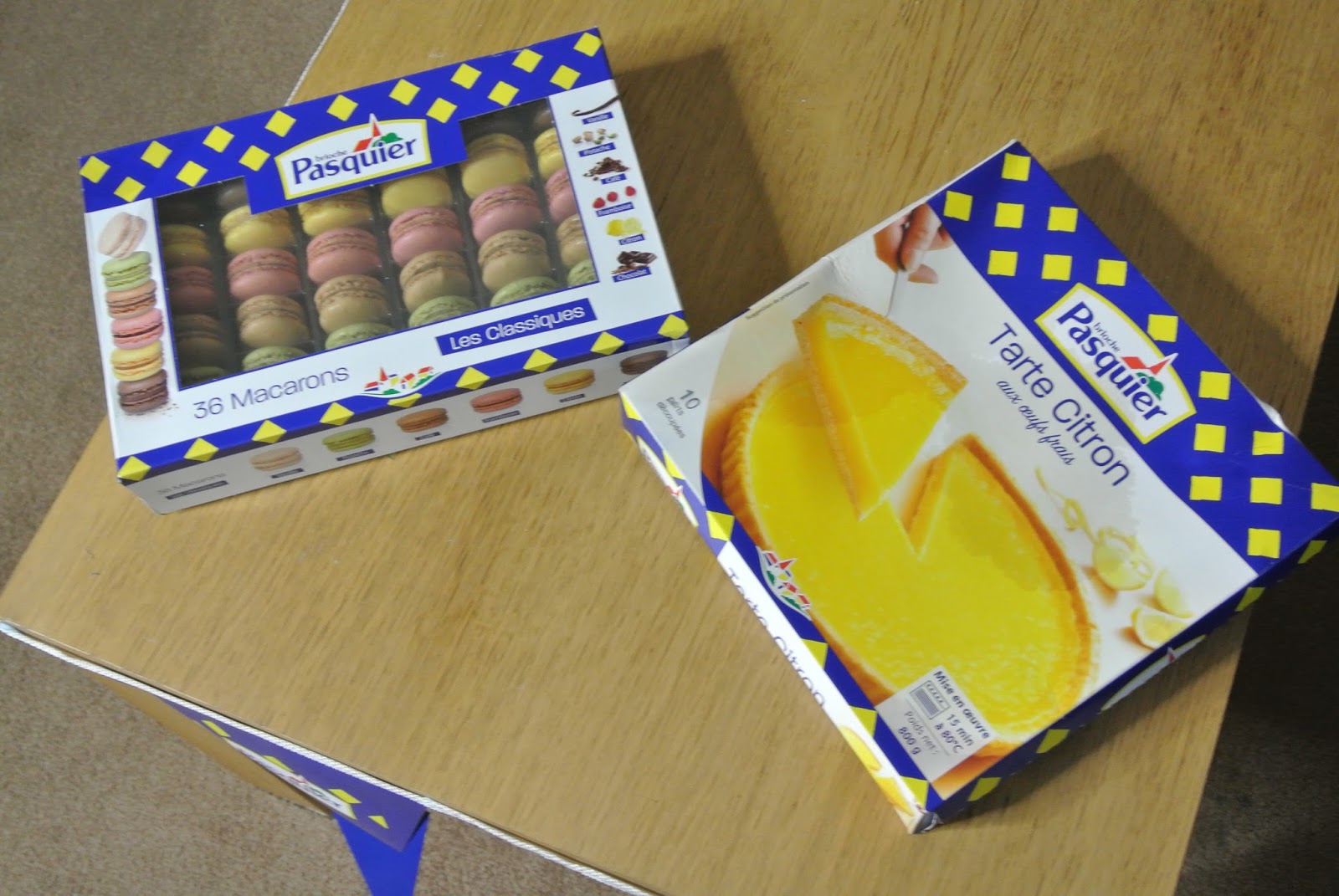 French family bakery brand, Brioche Pasquier, sent over some treats to get our  belated Galentines Day celebrations underway.  There was everything that I needed to decorate my sitting room to create a party atmosphere so while one of my friends blew up balloons, I popped some music on and got out my trusty blue tack to stick the bunting to the coffee table. 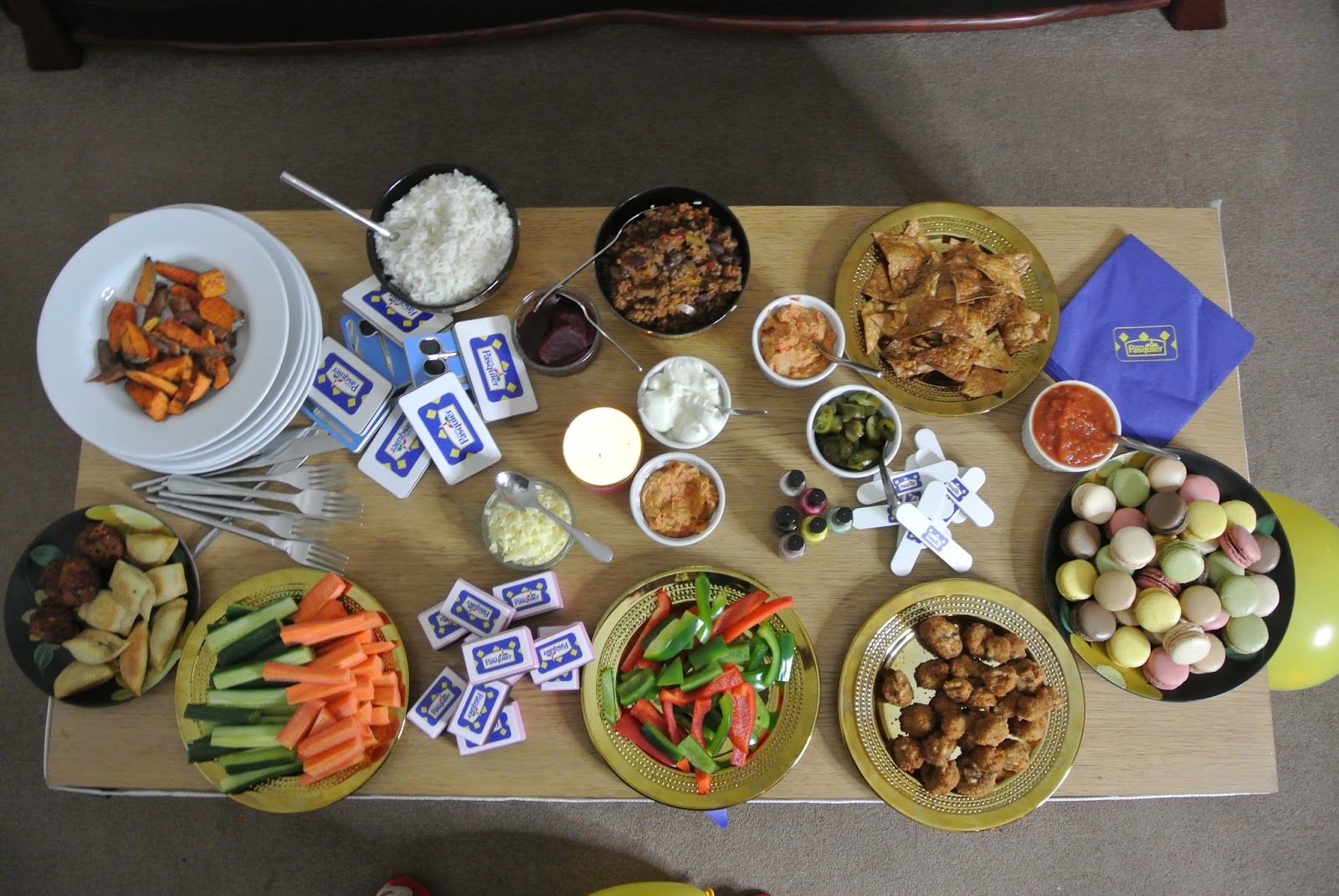 I asked each of the girls to bring some savoury snacks over and I made a big pan of chilli con carne and rice to put out on the table so that we could all help ourselves.  Chilli is a great dish to make for a buffet as it always goes down a treat, although I would recommend checking with your guests first to see how spicy they like theirs. 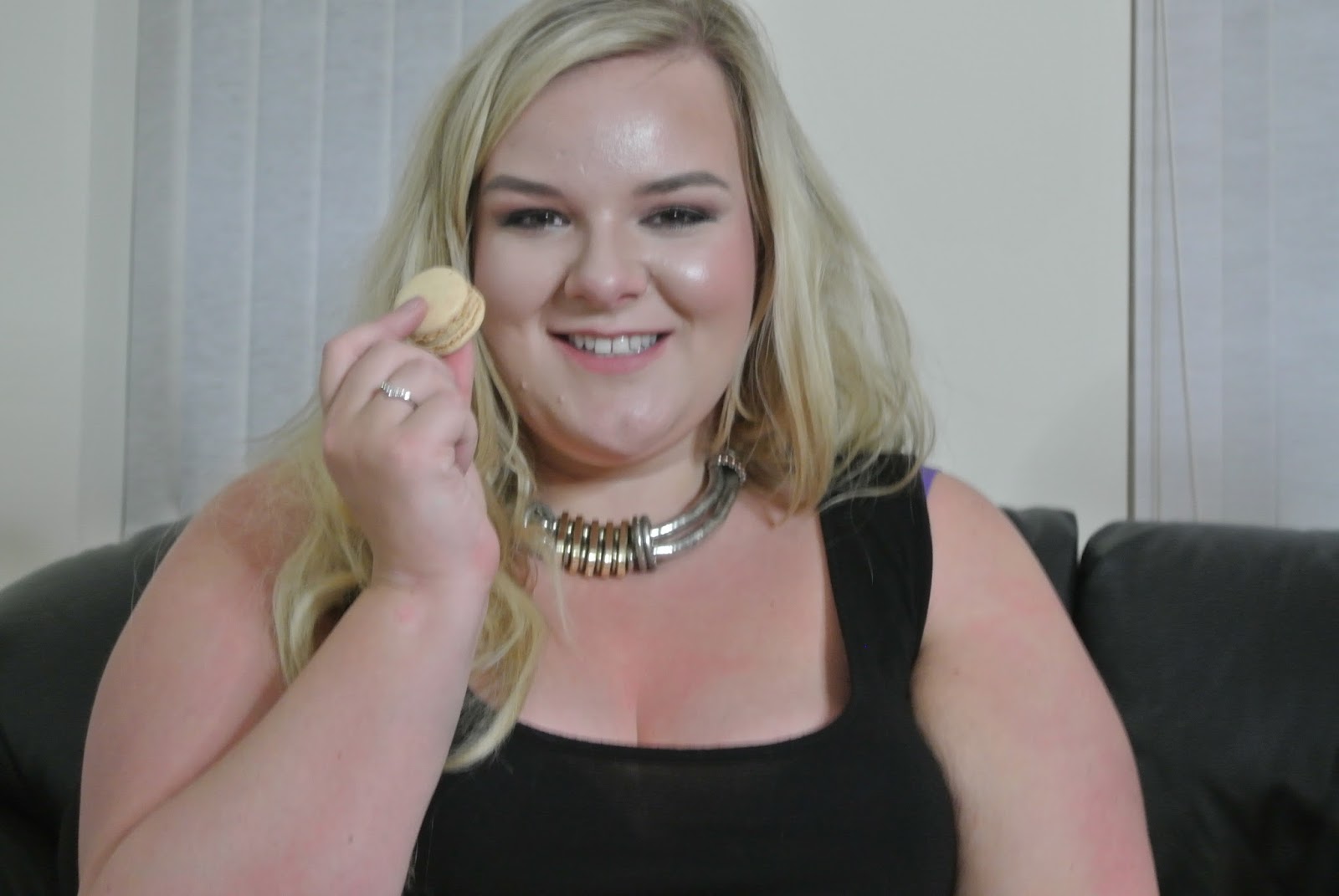 I’m sure you’ll have heard or seen Brioche Pasquier before; I know I certainly have as I’ve been buying their brioche in the supermarket since I was a teenager.  They’re a famous bakery brand who were founded way back in 1936 by Garbiel Pasquier in Les Cerqueux in France.  However, they are not only known for their delicious brioche but they also have over 20 years Pâtisserie experience too. 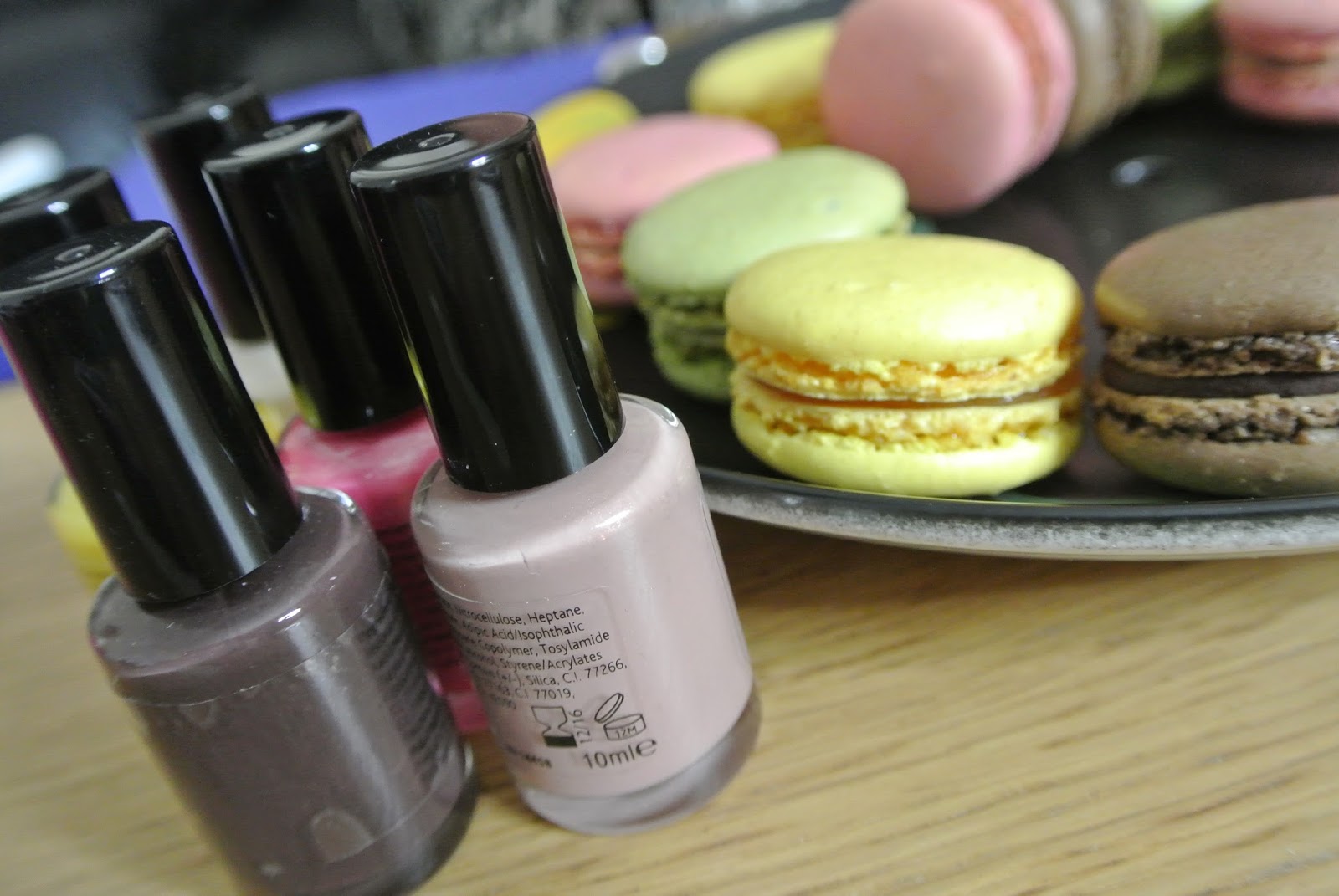 Its not surprising, therefore, that a company with such a history in French baking, should launch a new line of French delicacies which are all designed to be the perfect accompaniment to an indulgent afternoon tea or a dinner party.  The range includes Tartelettes au Chocolat, Tartlettes au Citron, six flavours of Macarons and a Tarte au Citron.  Brioche Pasquier were kind enough to send the latter two over to me. 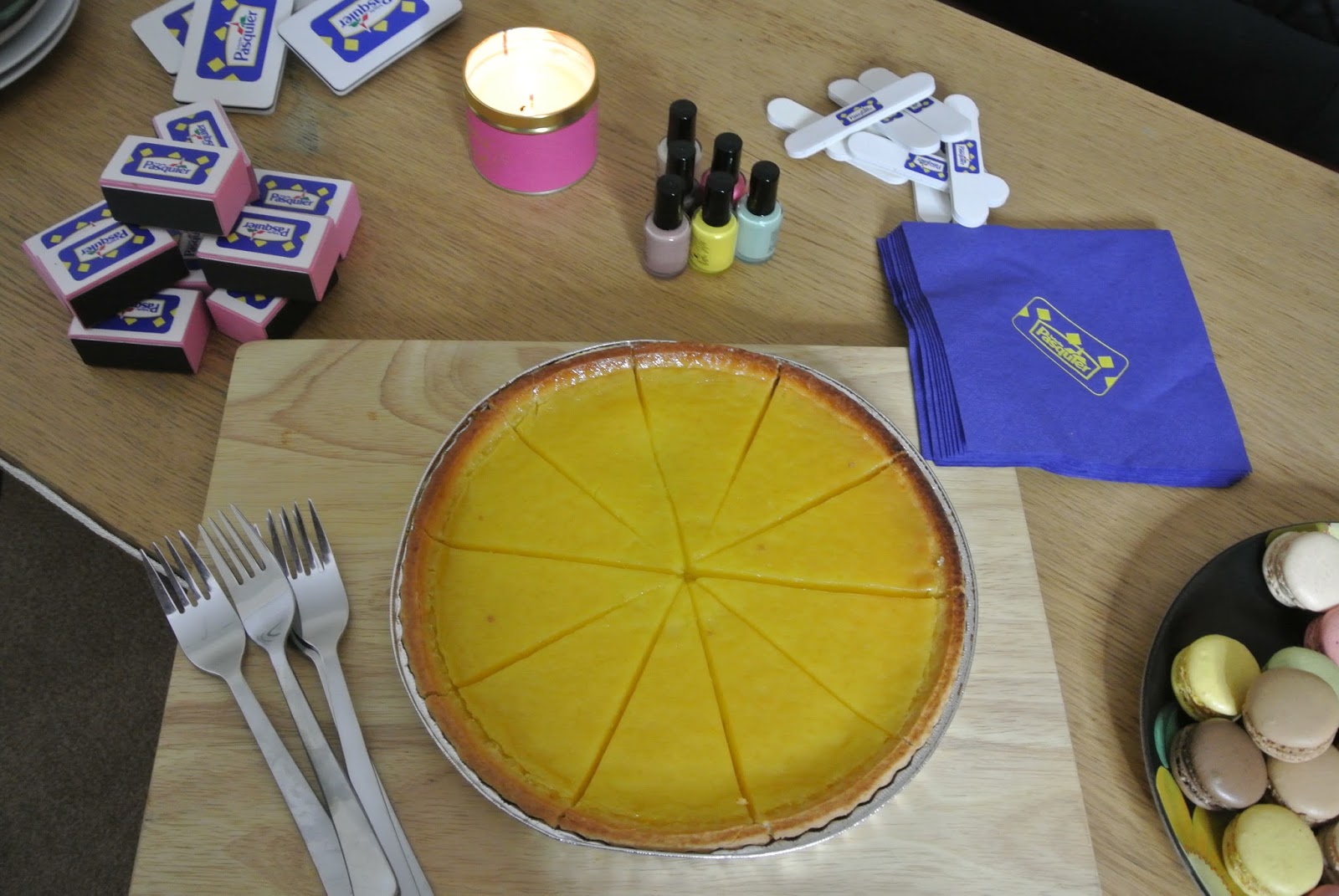 The desserts arrived frozen which is ideal when you’re throwing a party because it means that you can buy and plan in advance without worrying about having to pick up fresh cakes from a bakery.  On the day that you’re going to enjoy them, you simply take them out of the freezer to defrost, I put mine in the fridge, and once they’re defrosted, you can pop the Macarons onto a pretty serving plate and pop the Tarte au Citron into the oven to warm through before serving.  It couldn’t be more simple. 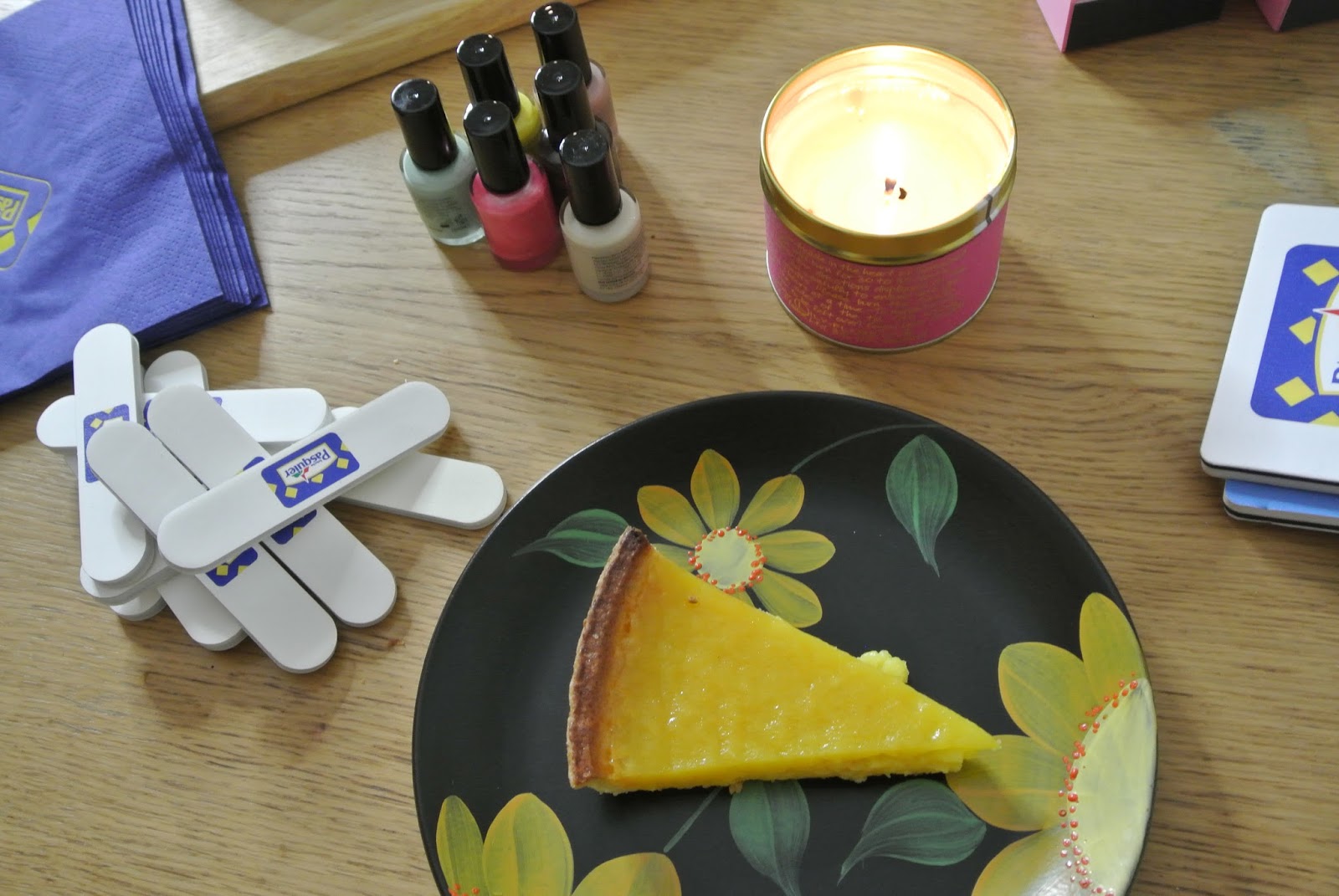 The great thing about the Tarte au Citron is that it comes pre cut into slices which is ideal if you hate cutting cakes or flans.  Everyone gets an equal portion and there’s no need to have to faff on with a knife at the buffet table as you can effortlessly lift a slice out with a fork or a cake slice.

We had ours warmed through with a little squirty cream, however you could easily add some extra fruit to the top of the tart or decant some pouring cream onto it if you wanted. 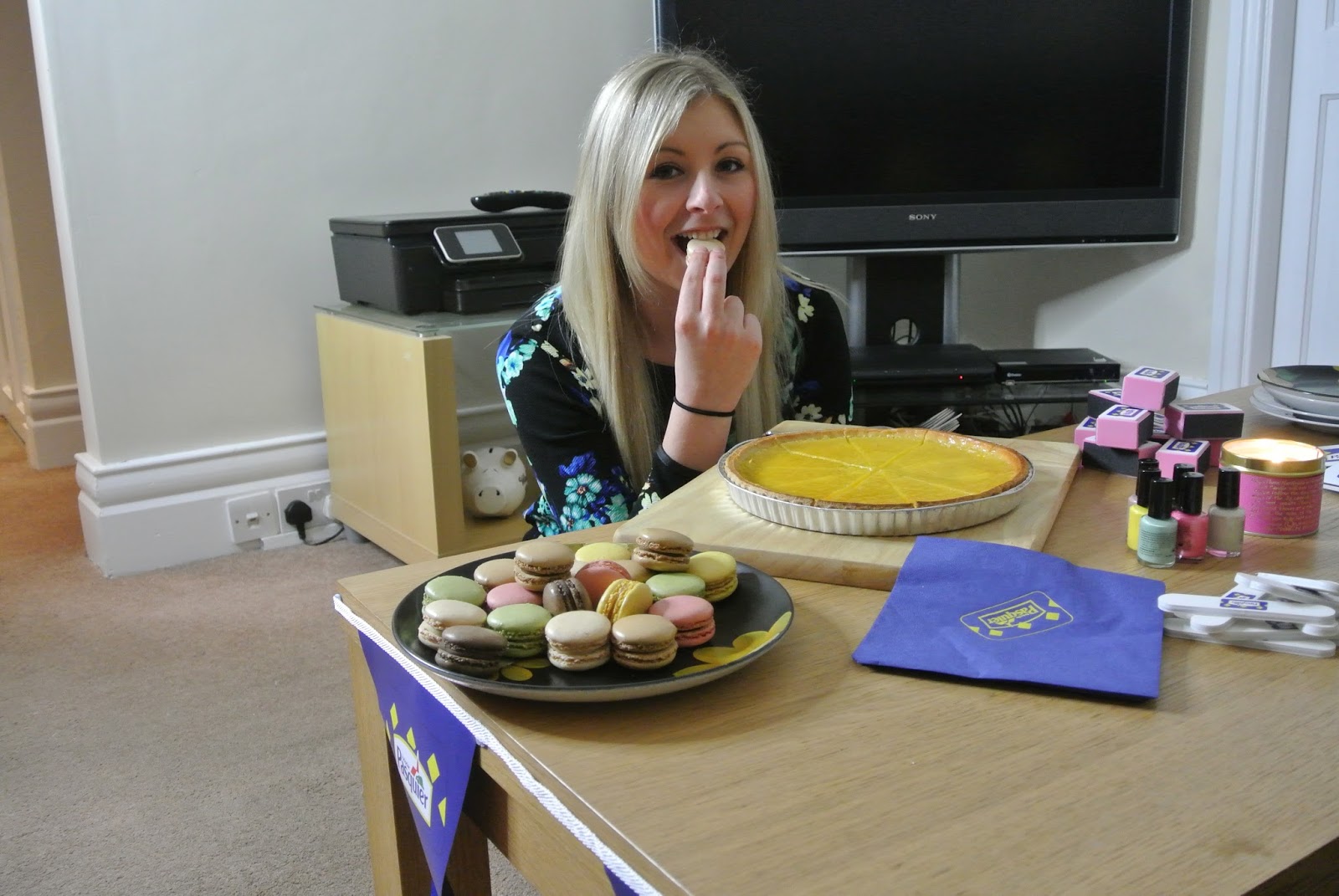 The Tarte au Citron is an ideal dessert to have after a flavoursome meal because it has the right balance between being light and refreshing thanks to the lemon favour and being warming and comforting, just as a dessert should be in my opinion. 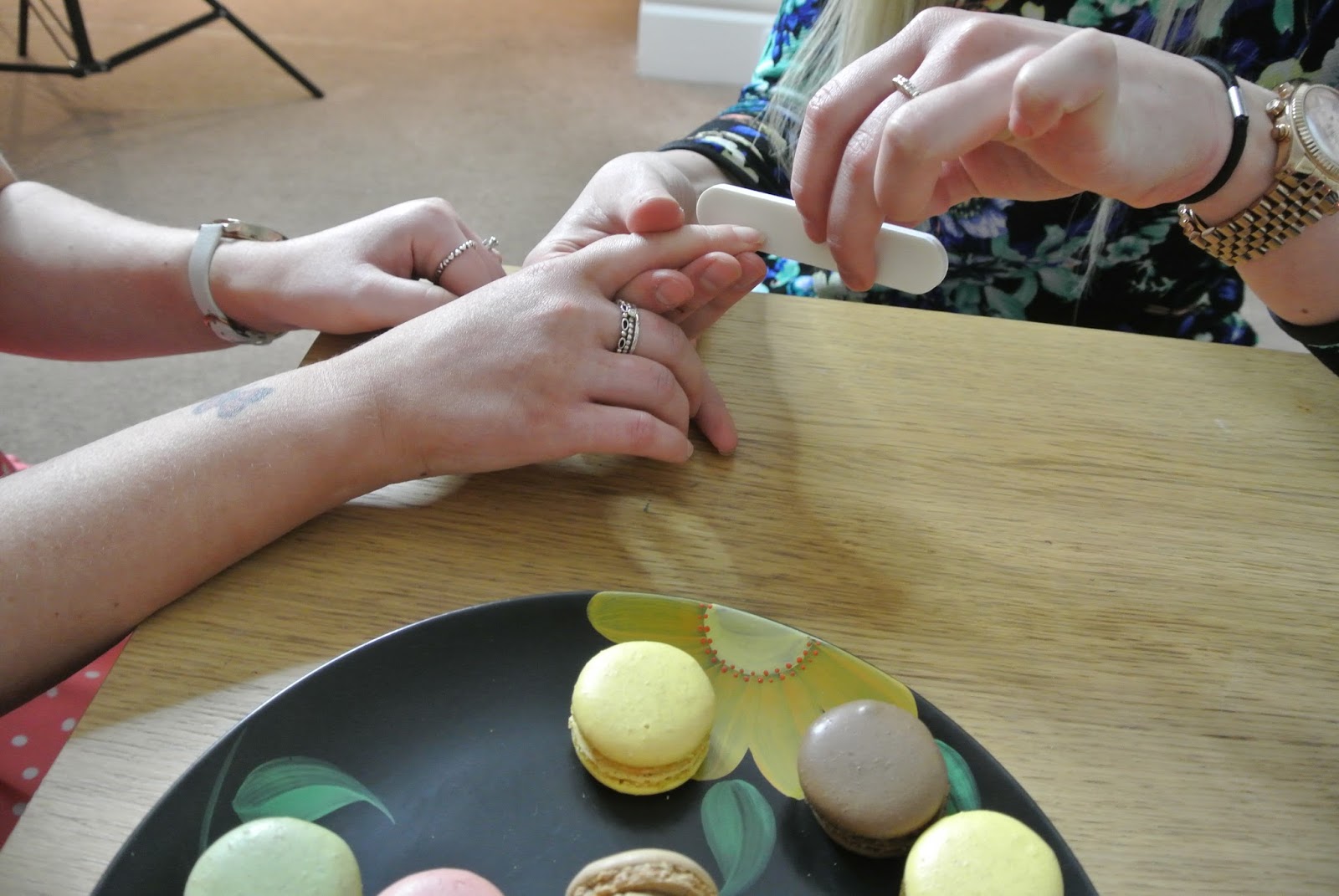 The real treat of the evening though, were the Macarons which we enjoyed while painting our nails.  Brioche Pasquier were kind enough to send over some nail polishes that coordinated well with the macarons, as well as some nail tools to get our nails in top shape, so it would be rude not to try them out and paint our nails the same colour as our favourite flavours. 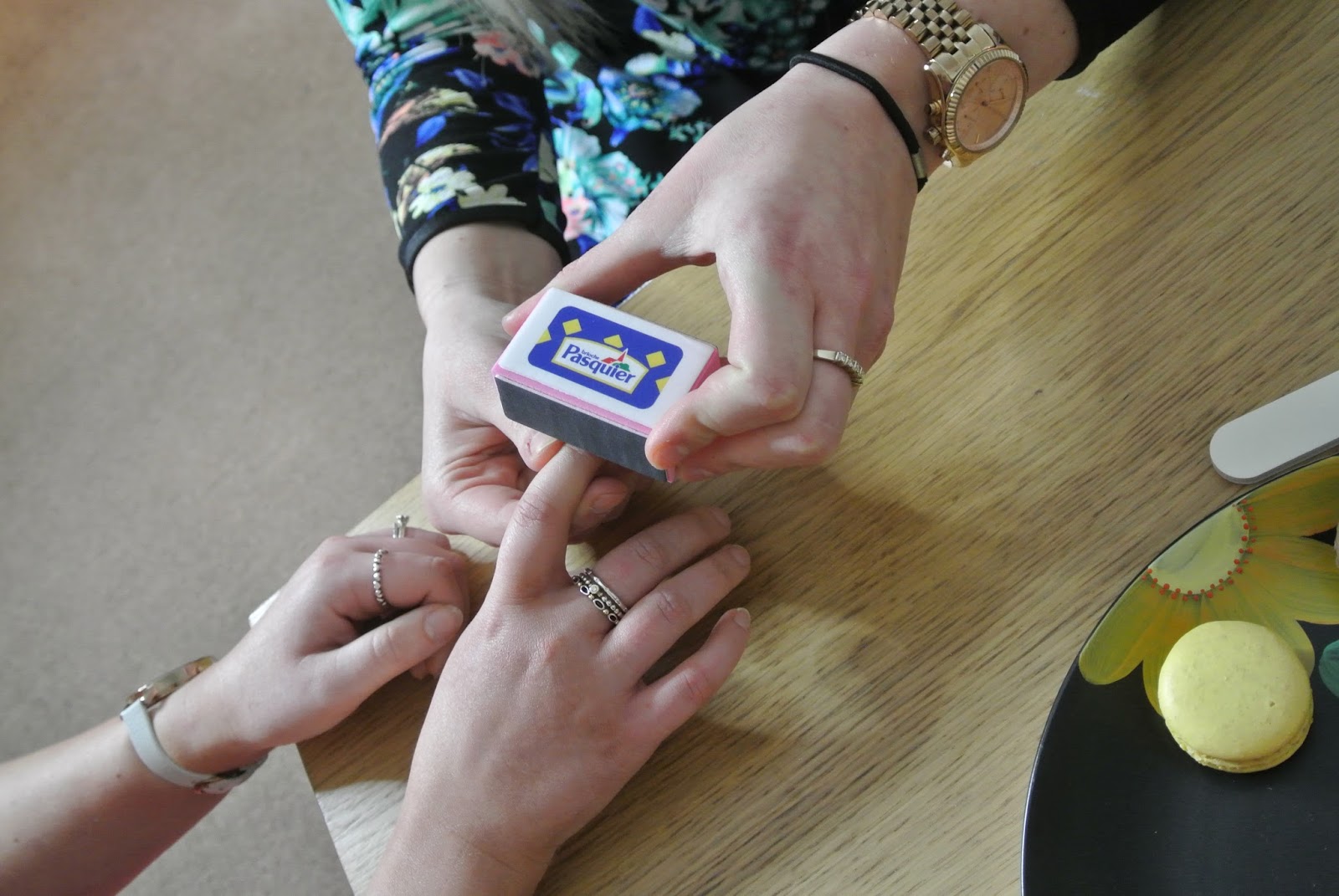 The box contained 36 macarons in six different flavours; raspberry, lemon, coffee, chocolate, vanilla and pistachio.  They were all in gorgeous pastel colours that are so beautiful aesthetically and would look beautiful laid out for afternoon tea. 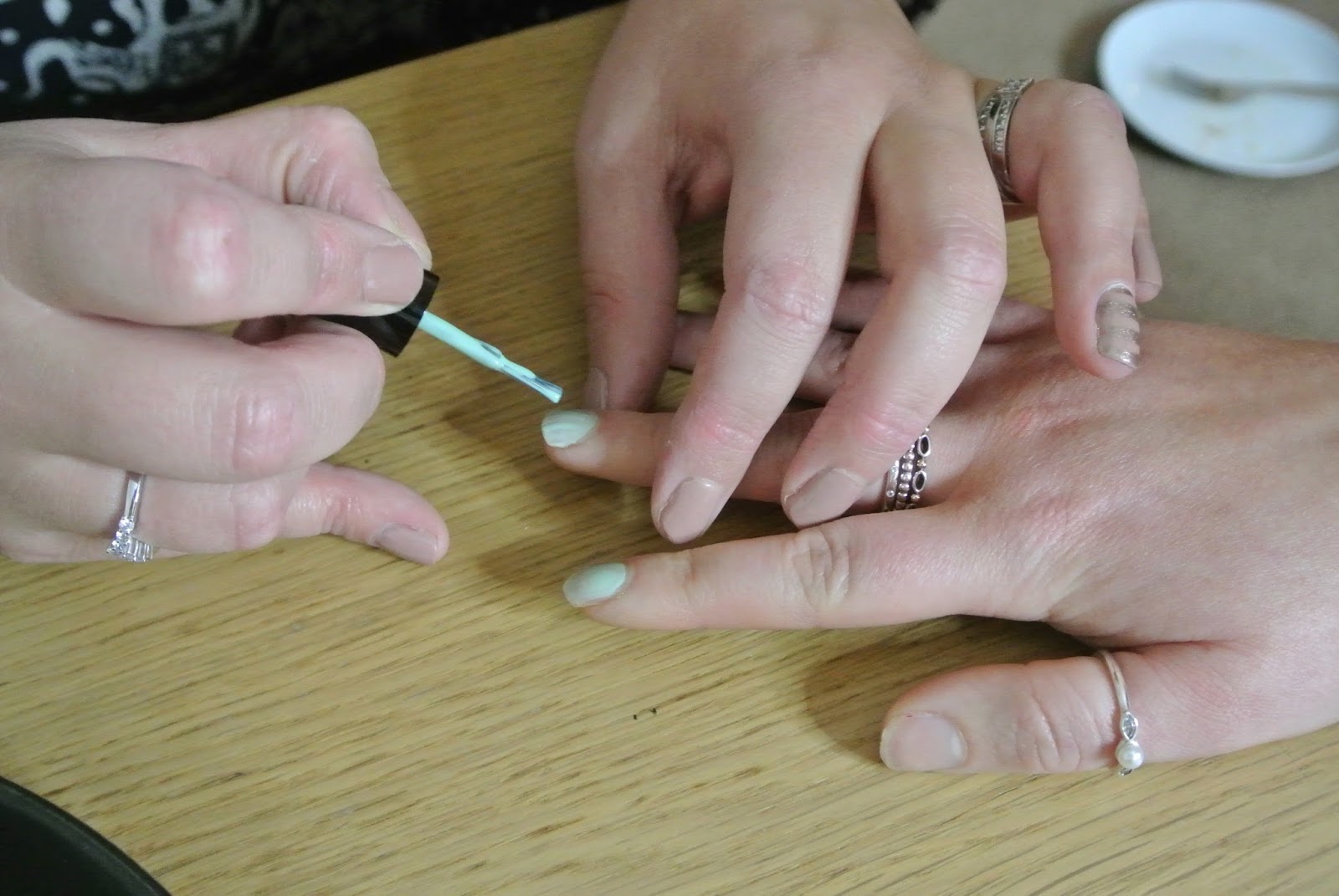 We all tried one of each and found it so difficult to choose between them as to which one was our favourite.  My friends and I are very much macaron lovers but we all agreed that we hadn’t found a range before where we’d enjoyed every single one in the selection.  Usually there’s one or two flavours that we don’t like but each one of these was delicious. 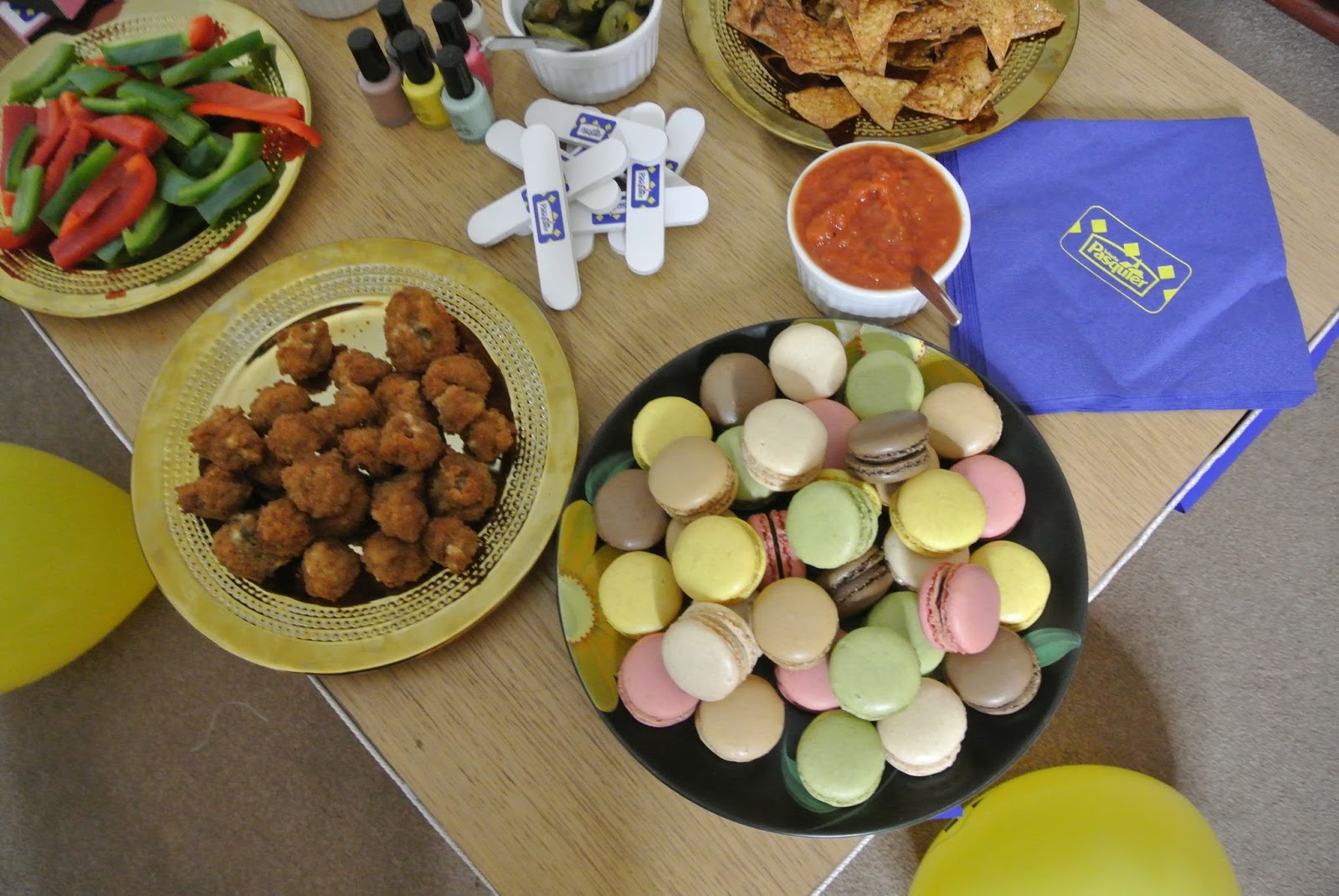 The Brioche Pasquier Macarons taste so fresh, despite being frozen; you could easily pass them off as having just been collected from a French patisserie!  Each flavour tastes authentic and there’s nothing artificial tasting about them either.  They’re not too sweet so they’re not something thats going to tip you over the edge after a big meal; they’re light with just the right amount of crunch on the outside as you bit into them. 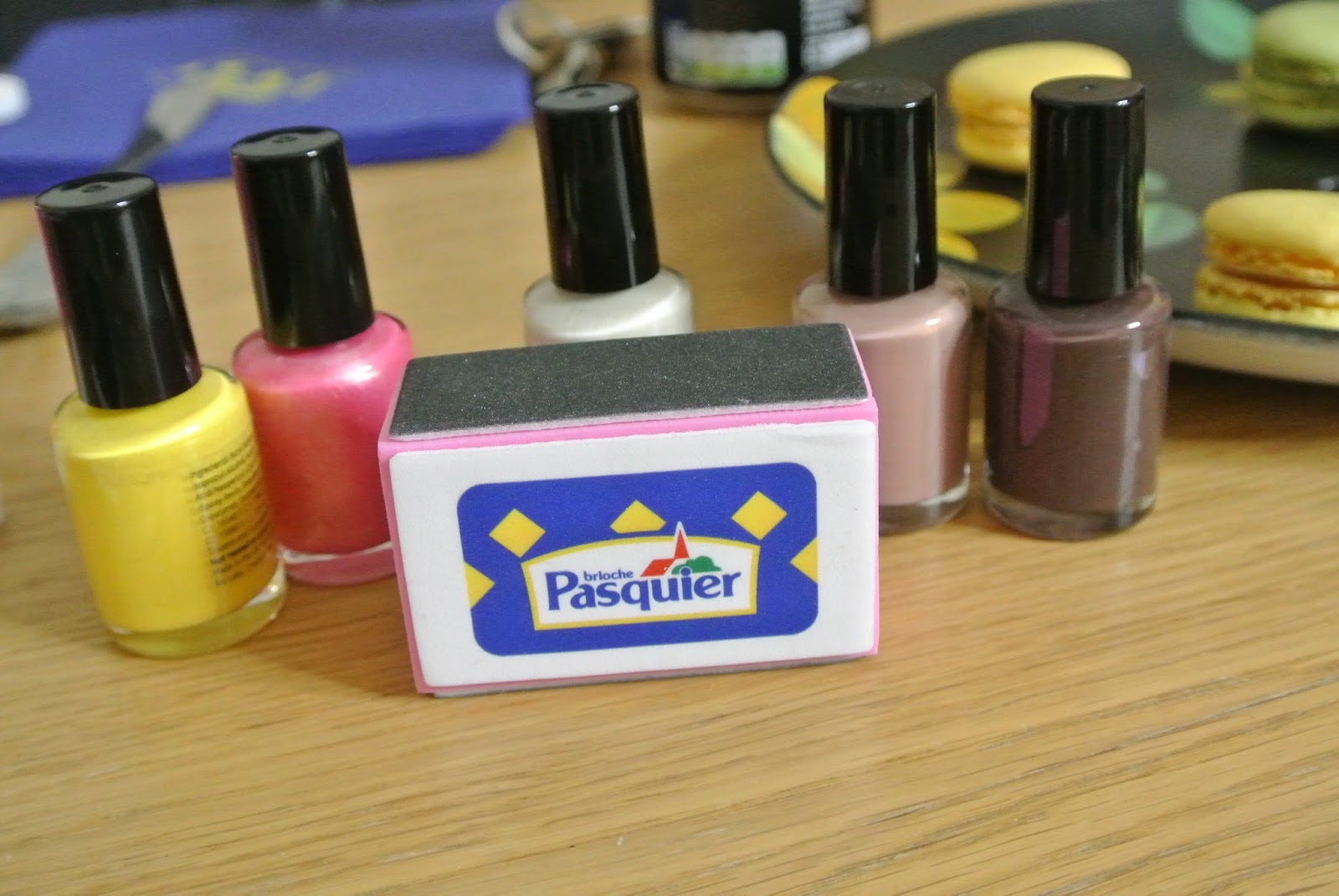 Since we’re such big macaron fans, my friend even suggested that these would make a great gift for someone for their birthday instead of chocolates or the other generic confectionary you can buy.  Imagine opening a box of these goodies! 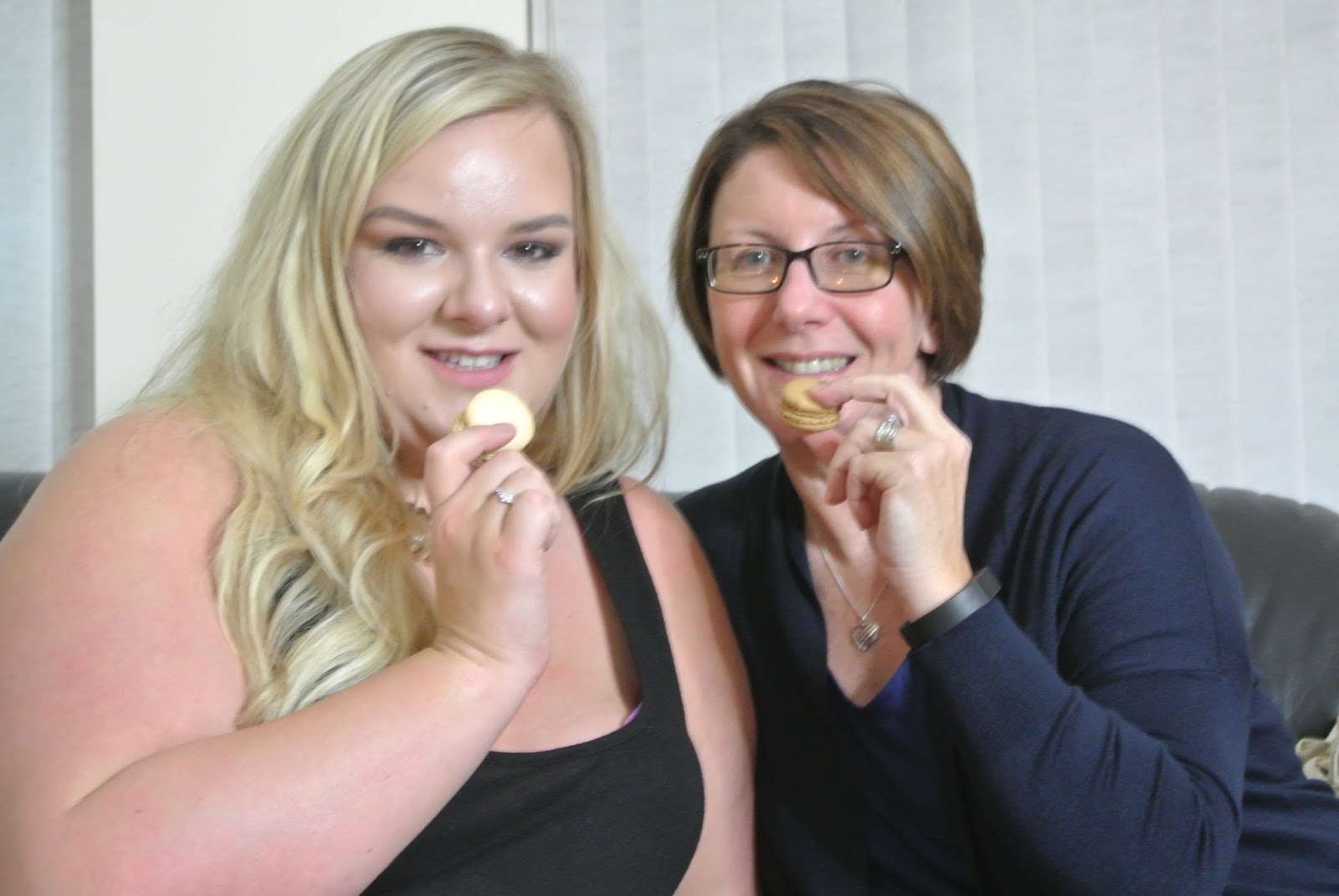 Speaking of gifts, each of my friends got to go home with a Brioche Pasquier tote bag with some nail care accessories inside too! 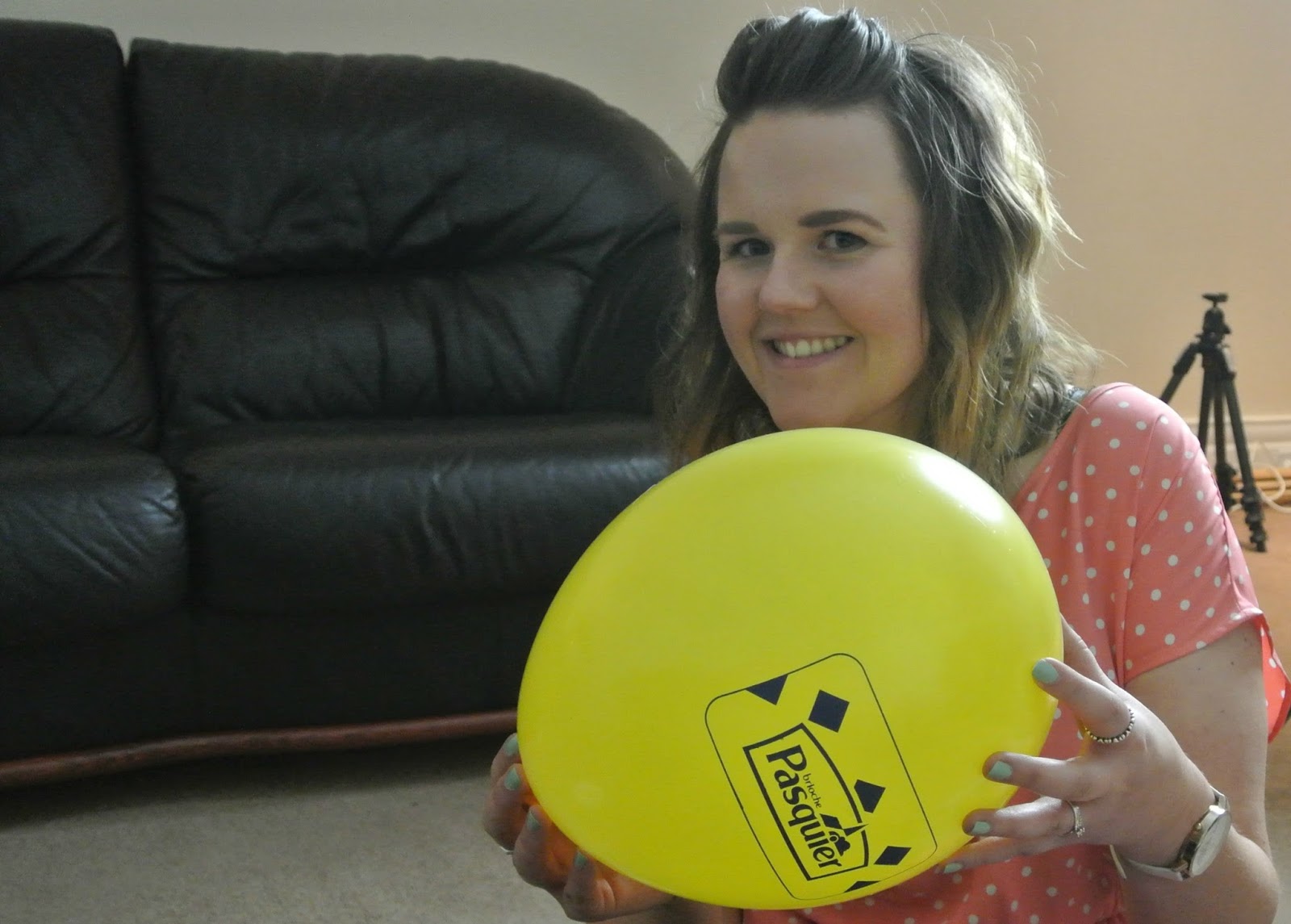 We all had such a lovely evening; it was really great to catch up, enjoy good food, delicious desserts and to give each other a #MacaronManicure!  You can join in the conversation using that hashtag too as I’m sure many others will have been hosting their own parties.

All Brioche Pasquier products are available to buy from Ocado here and they’re really affordable.  The box of 36 Macarons are only £12.99 and that huge Tarte au Citron is £5.99; I know, I couldn’t believe it either!

What are your favourite macaron flavours?